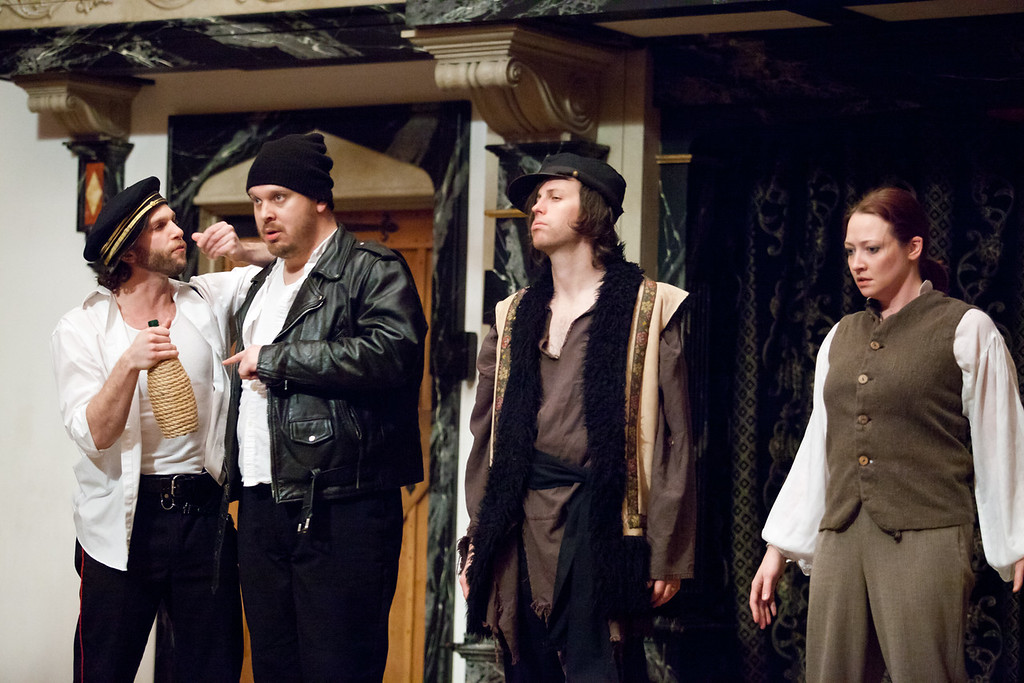 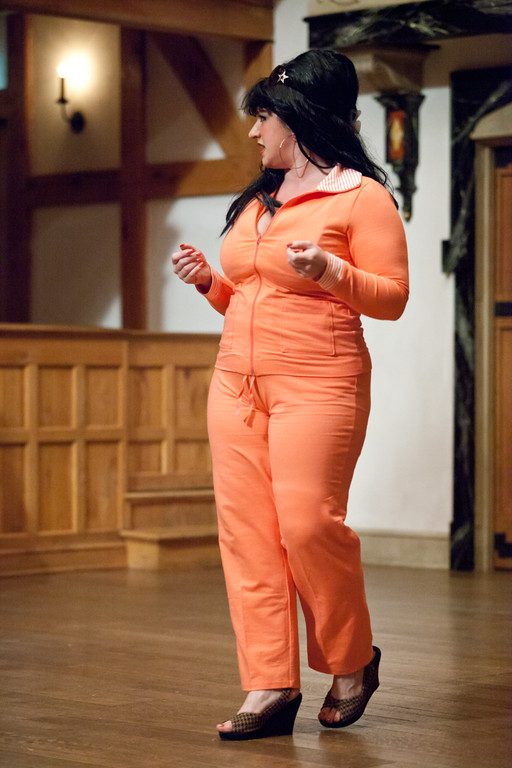 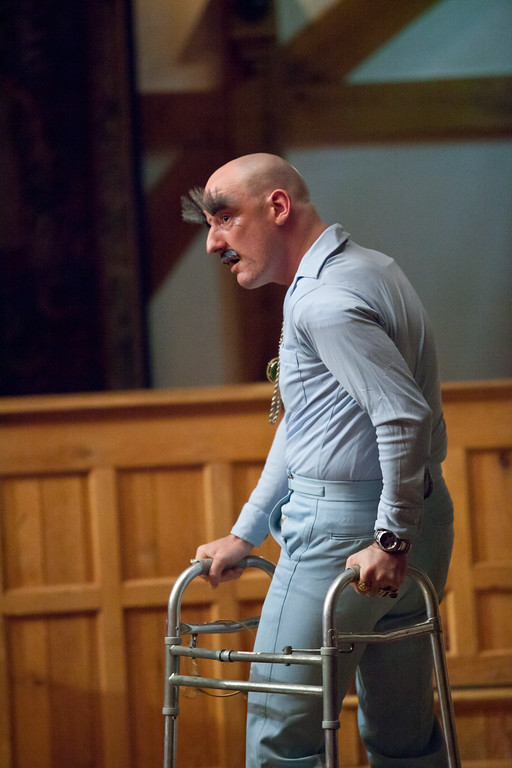 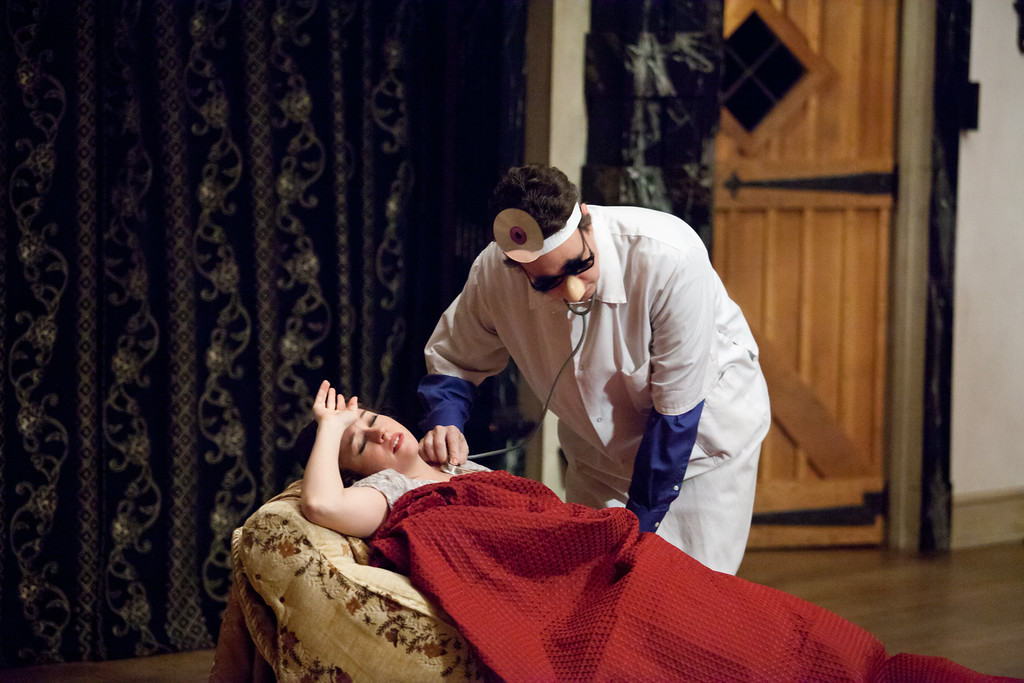 Miriam Donald and John Harrell in A MAD WORLD, MY MASTERS. 2012. 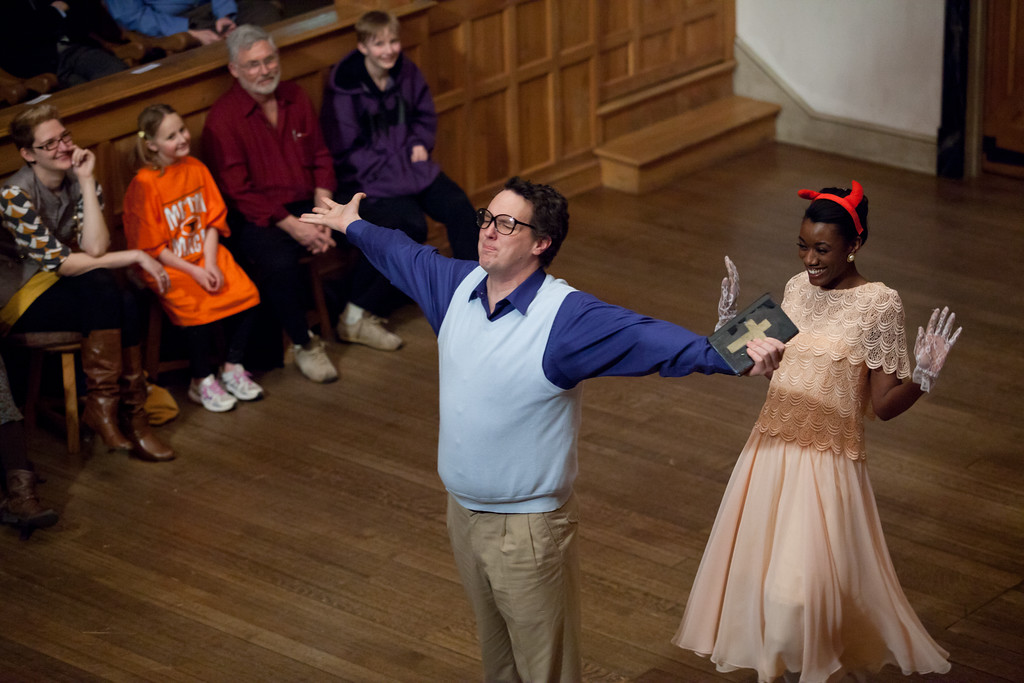 John Harrell and Brandi Rhome in A MAD WORLD, MY MASTERS. 2012. 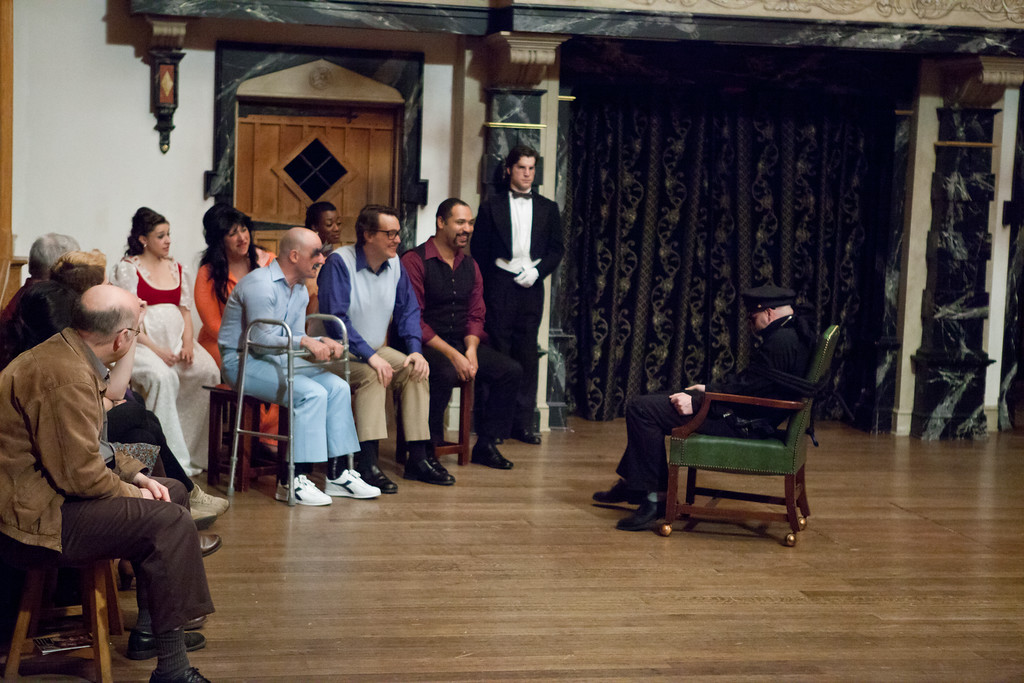 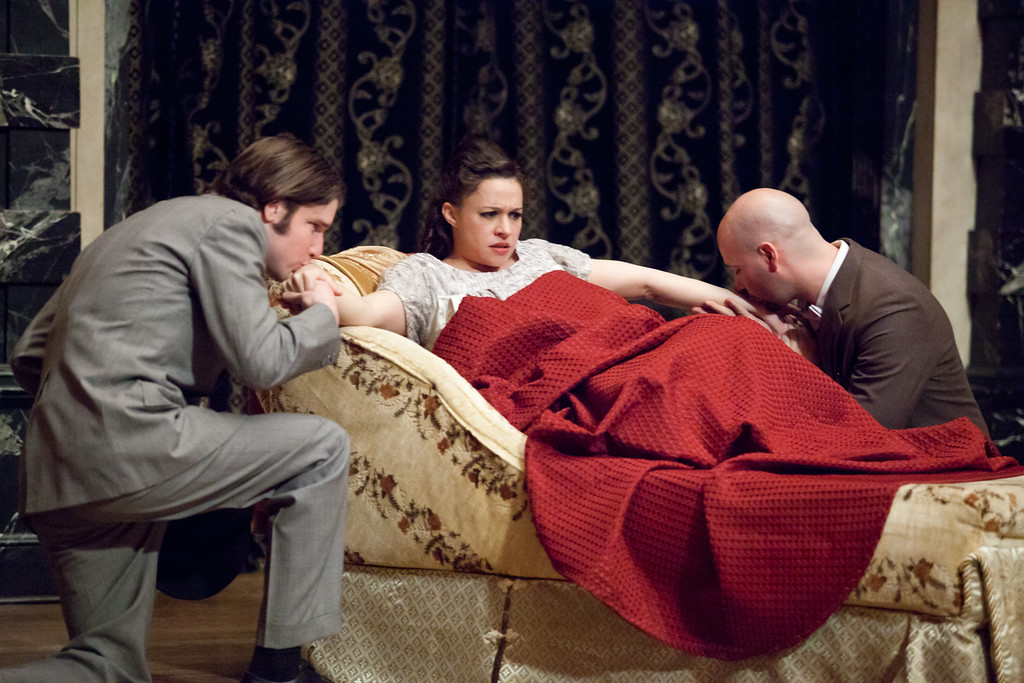 Aidan O'Reilly, Miriam Donald, and Daniel Kennedy in A MAD WORLD, MY MASTERS. 2012. 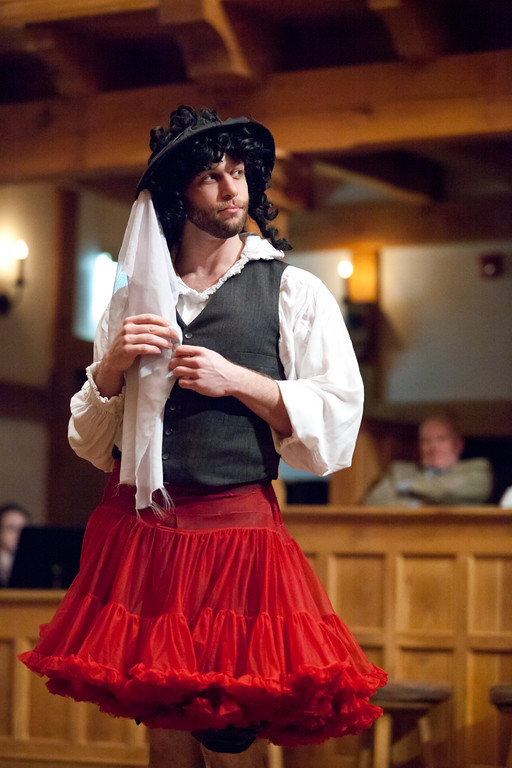 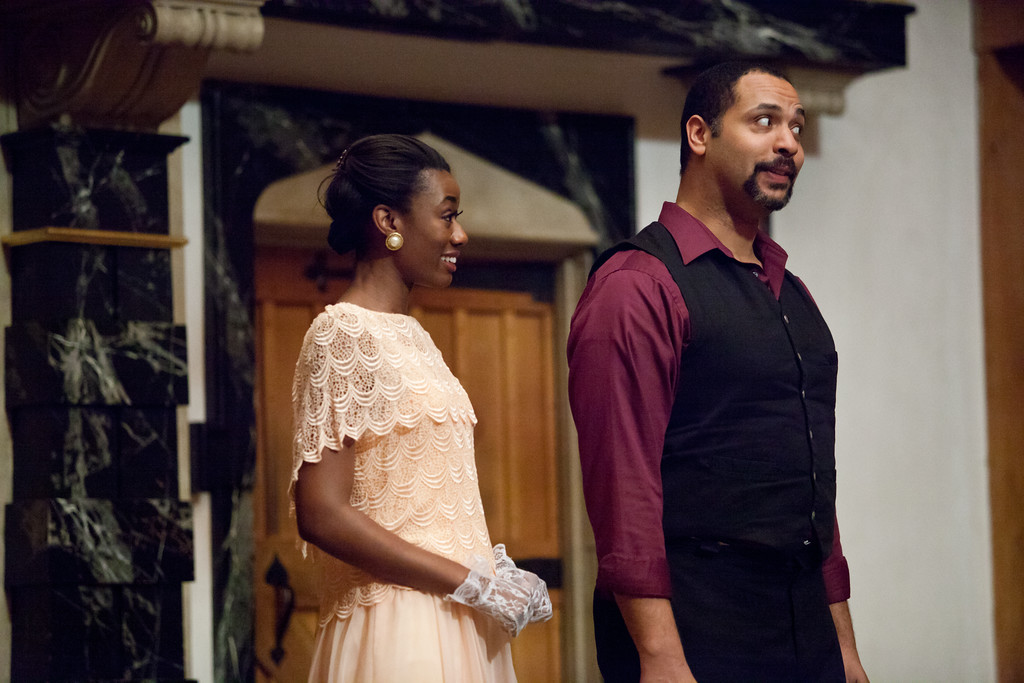 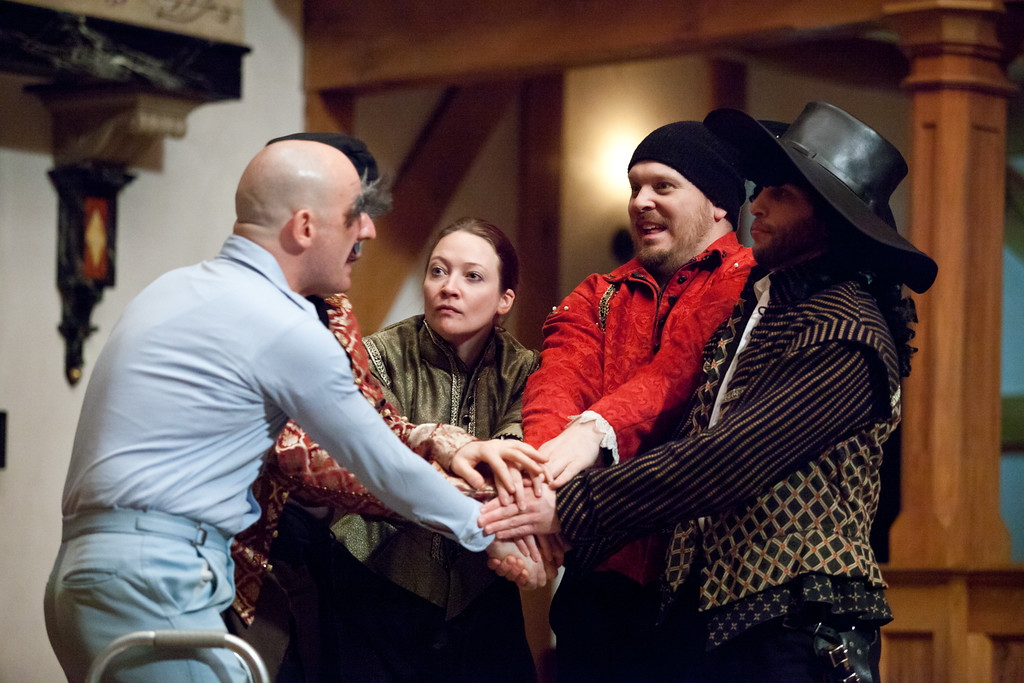 2. Where was the play first performed?
By Paul’s Boys at Paul’s Playhouse, the smallest of the indoor venues.

3. Who wrote it?
Thomas Middleton (1580-1627), sixteen years Shakespeare’s junior, was the son of a bricklayer (like Ben Jonson). He went to university (unlike Shakespeare or Jonson). He wrote everything from pamphlets to poems and from pageants to tragedies.

5. How are these playwright unlike Shakespeare?
Unlike Shakespeare, Middleton prefers to set his comedies in London, where his plays track the lives of his characters in great social and economic detail. Middleton’s work is invariably unsentimental. In his plays, an active sexuality is the given and love is a quaint commodity. His comedies are overwhelmingly in prose, while Shakespeare’s average about two-thirds verse.

6. What do scholars think about this play?
A Mad World, My Masters is one of Middleton’s most popular plays and a forerunner of the Restoration-era “Comedy of Manners.” Perhaps because it is even bawdier than A Trick to Catch the Old One (see below), the play survived in the Restoration only in severely adapted versions, and, of course, disappeared altogether from the reformed stage of the 18th and 19th centuries. It had to wait until the late 20th century for a sufficiently depraved audience to come along.

7. Is there any controversy surrounding the work?
Not outside of church.

8. What characters should I especially look for?
To give you an idea, here are some of their names: Sir Bounteous Progress, Mr. Richard Follywit, Mr. Penitent Brothel, and Mr. Shortrod Harebrain. All these characters pay the promise of their names, but none so wonderfully as the courtesan, whose name – Frank Gullman – sums up her attitude and her hobby.

9. What scene should I especially look for?
“Listen for” might be more accurate: Act 3, scene two, in which Shortrod Harebrain eavesdrops on his wife and her lover, does more with sound effects than Meg Ryan in When Harry Met Sally. Another scene of many to “look for” is the play-within-the-play in the last act.

10. What is the language like?
Audiences who came to last year’s production of A Trick to Catch the Old One reported that they thought it sounded like a contemporary play. This play, written soon after, is likely to sound a few months more contemporary.