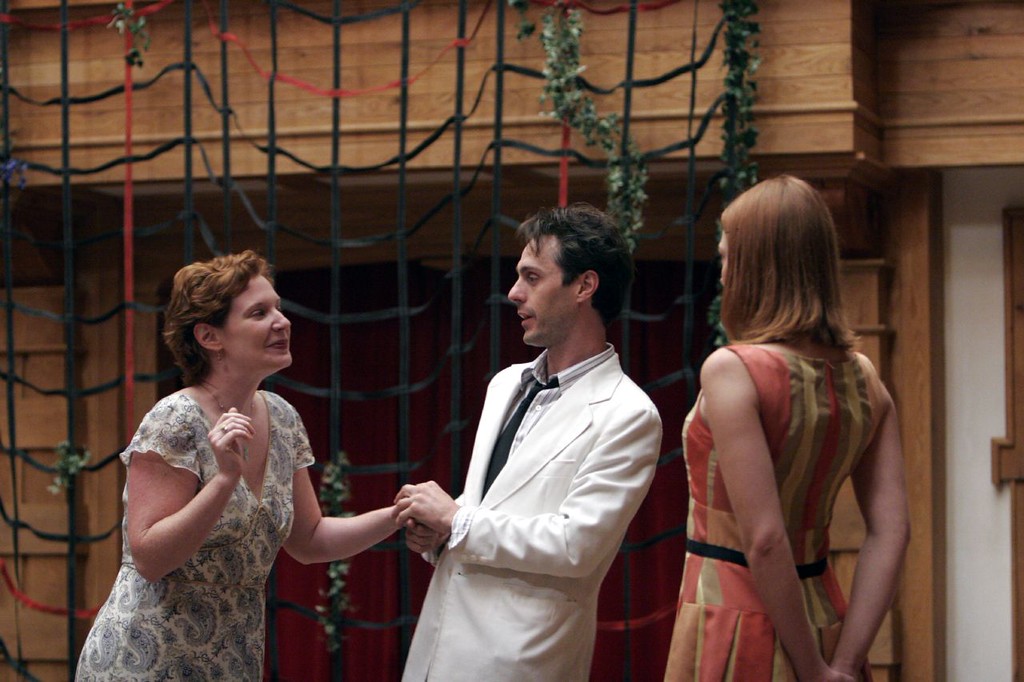 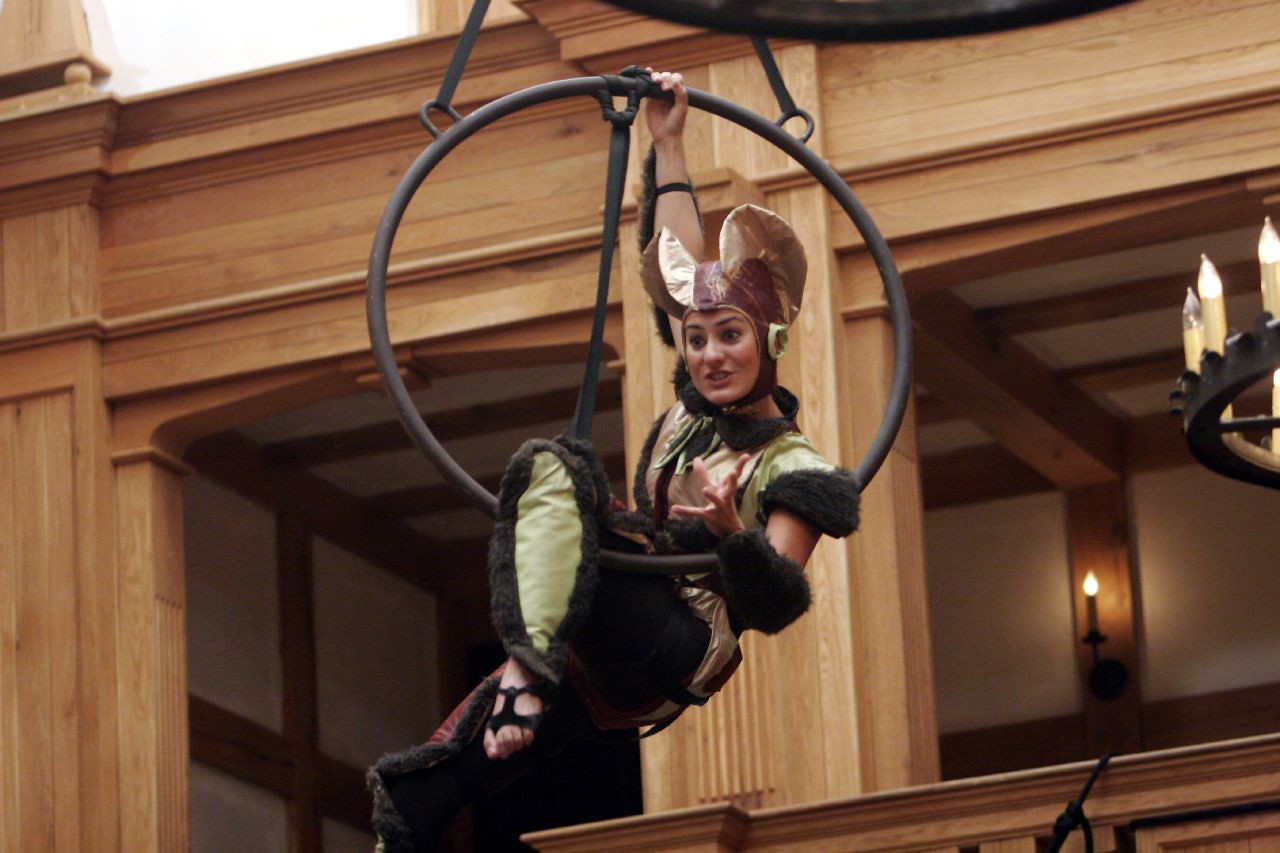 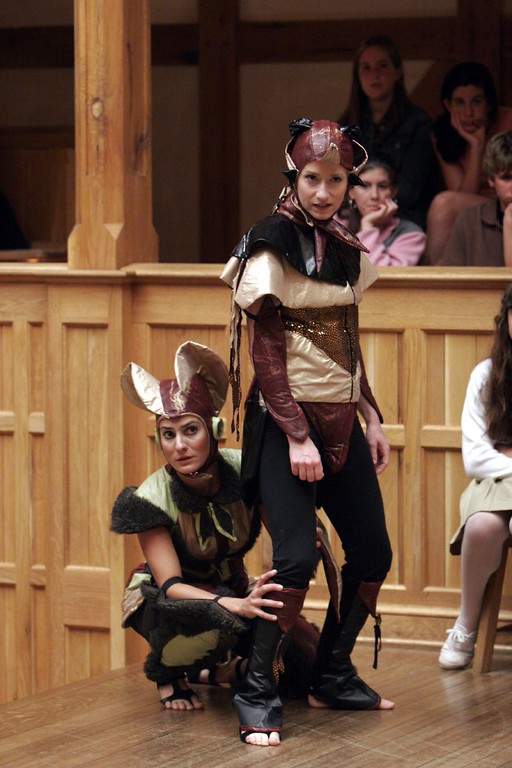 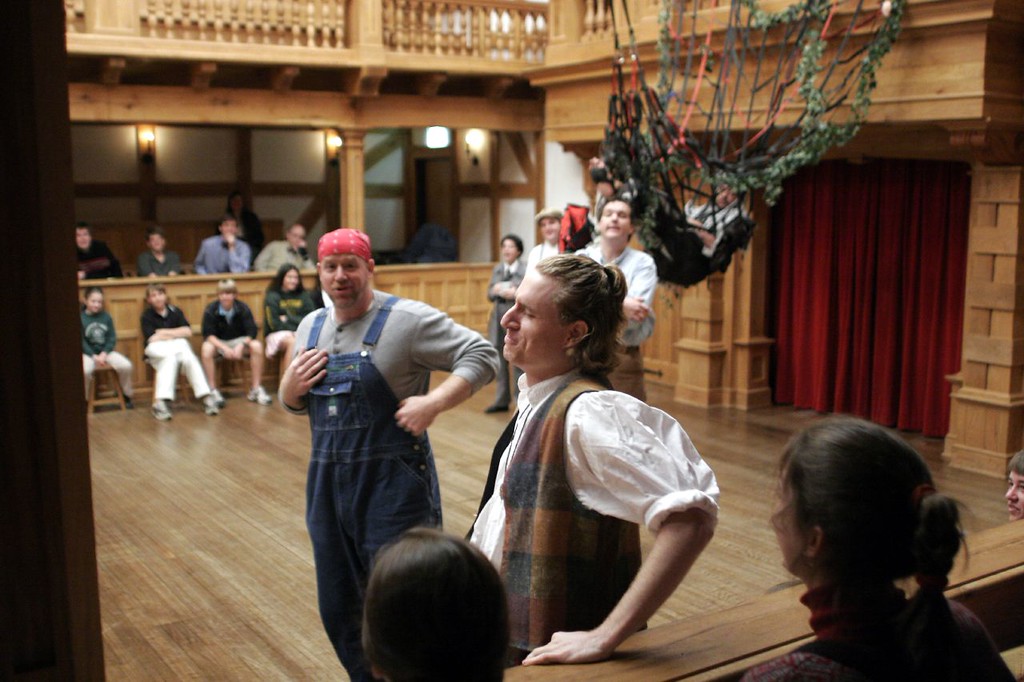 James Beard, James Keegan, and the cast of A MIDSUMMER NIGHT'S DREAM. Photo by TOMMY THOMPSON. 2004. 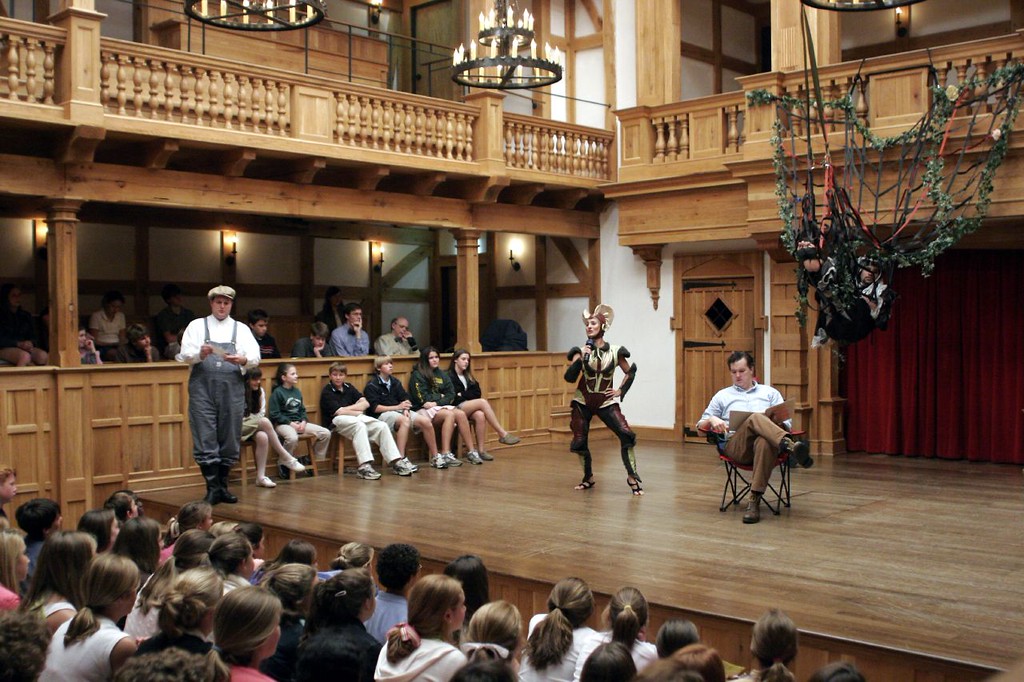 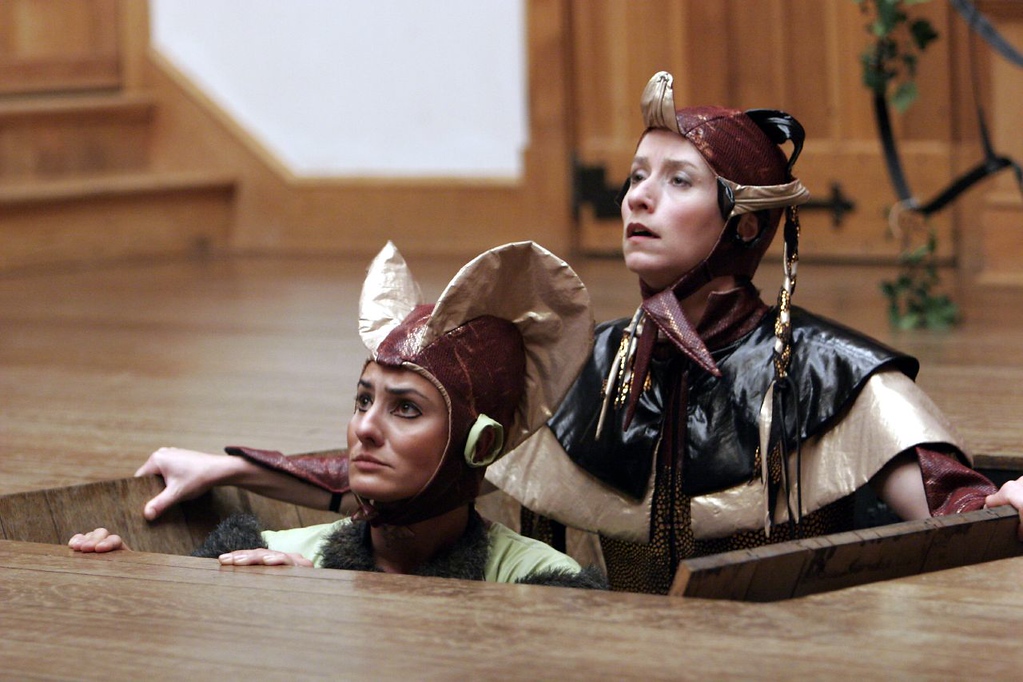 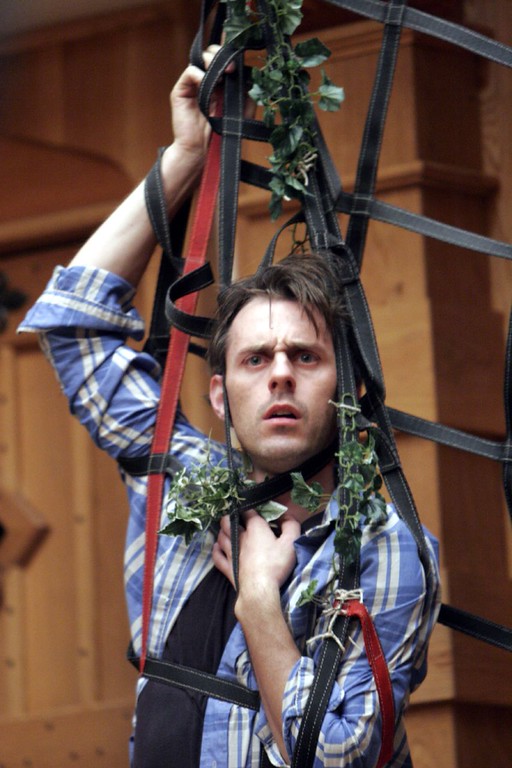 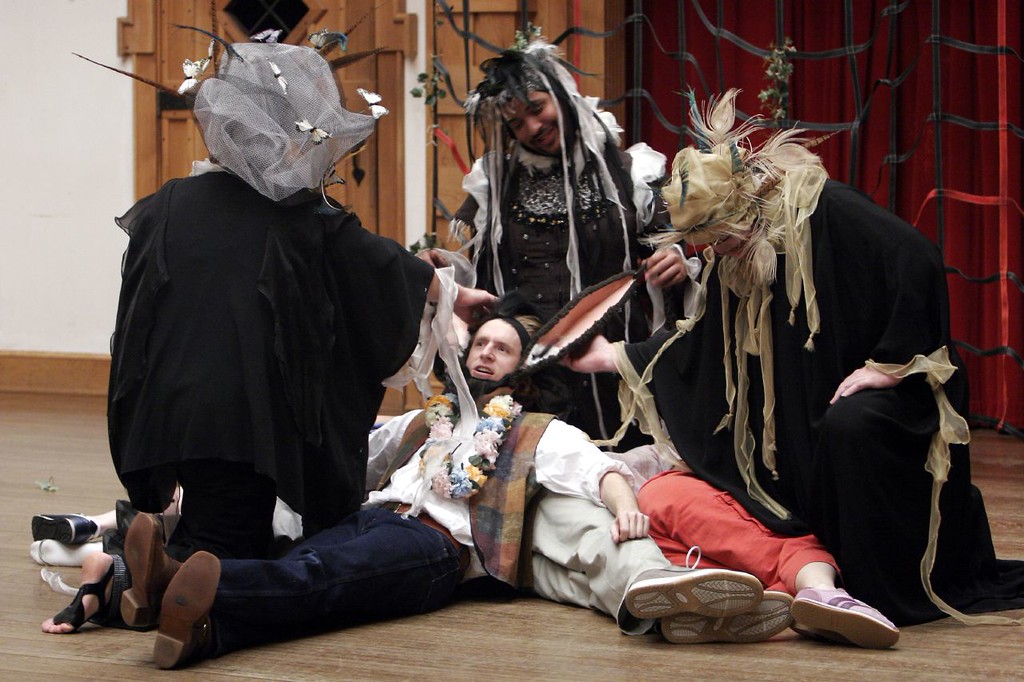 The cast of A MIDSUMMER NIGHT'S DREAM. Photo by TOMMY THOMPSON. 2004. 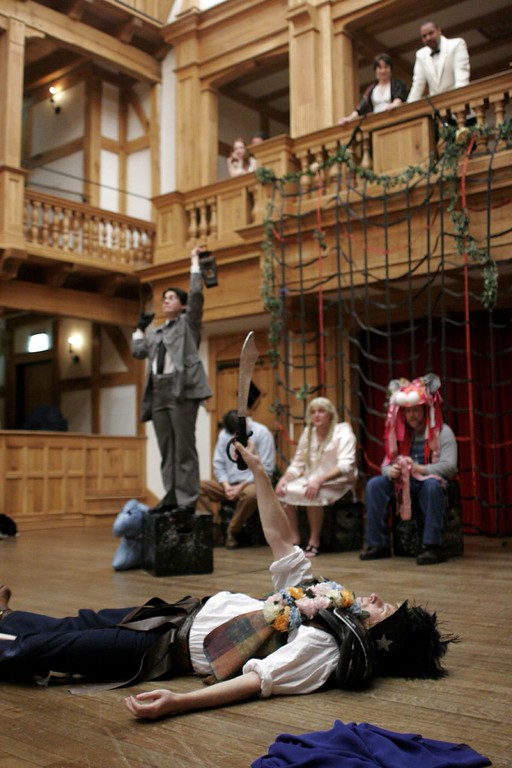 The cast of A MIDSUMMER NIGHT'S DREAM. Photo by TOMMY THOMPSON. 2004.

the primal forces of fairyland

Jack shall have Jill,
Naught shall go ill,
The man shall have his mare again, and all shall be well.
– Puck: III,ii

When I was six, I was the proud owner of a little record player. It lived on the floor of my bedroom, under my windows with their filmy white curtains. My favorite record was A Midsummer Night’s Dream. I would lie on my stomach on the rug and listen to the magical words for hours, letting invisible imps and sprites fill the room around me until the lifted me up to dance and sing with them, wreaking havoc with the normal everyday order of things. I loved Titania’s lullaby most, with its mesmerizing chorus of “Lulla, lulla, lullaby…Lulla, lulla, lullaby…”

One afternoon, I was singing along with Titania’s fairies when I heard my mother’s voice calling upstairs, asking, “Who’s with you?” I said, “No one.” She responded, “But I know there’s someone up there with you – I can hear them!” To me, this was confirmation that the invisible creatures inhabiting my wildly enchanted room – were real. I really was in the dangerous company of armies of mischievous pixies…

…In the hands of a lesser playwright, A Midsummer Night’s Dream might have been no more than a pretty little yarn about fairies playing tricks on naive young lovers and uncultured workmen. But Shakespeare’s genius has fired this story with so much more. He creates a fairyland that operates under its own rules, with unmistakably human hubris, ego, and chauvinistic excess. The fairies in this play embody free primal forces of unruly caprice and emphatic desire. The primitive power of love is nearly fatal to these fantastic creatures; woe betide the far weaker humans caught in those swirling, perilous eddies. Love, in Midsummer’s cosmos, is not a delicate sweetness but a tsunami that crushes any who dare defy it.

In our production, primal forces of fairyland divide into polar pairs: female/male, moon/sun, yin/yang. The elements are incompatible with one another, yet each depends up on the other for a balance that is critical to survival. Fire and ice together will destroy one another; unchecked and alone, fire or ice will destroy everything.

Oberon and Titania’s dispute over the Indian boy sends the world spinning out of balance. Lovers become infected with wrangling, the seasons careen out of kilter, animals and humans are made thoroughly miserable by the lack of balance in the universe. The King and Queen’s fairy followers are even surlier than usual, and ready to take it out on humans. Continually underlying all this chaos is a true yearning for unity, for balance, for harmony…

…and perhaps there is no one who understands this with more certainty or innate wisdom than a child dancing in her room with a bunch of rambunctious fairies. The magic of unseen spirits and the wonder they inspire is elemental, universal, eternal, primal – necessary. Shakespeare’s play springs to life so strongly for us, whether we are young or old. That might be because, after all, this play is confirmation of what we already know: the world of fairies is a primal force, and it’s very, very real.

S2’s original 2004 production of Dream ran for 11 performances in February and March. Although we knew that we would be changing casts and remounting the show as part of our 2004 Summer/Fall Season, we had no idea how many old and new cast members we would have. As it turns out, only two actors from the original production are back in the same roles. Putting 10 new actors into new roles made me think that I would be silly to try and re-create all of the same choices of the original show. So, instead, we kept most of the costumes, doubling, and music from the original production and started over with just about everything else. The result is a show that has something old, something new, something borrowed, and I’m sure we’ve got something blue in there too.