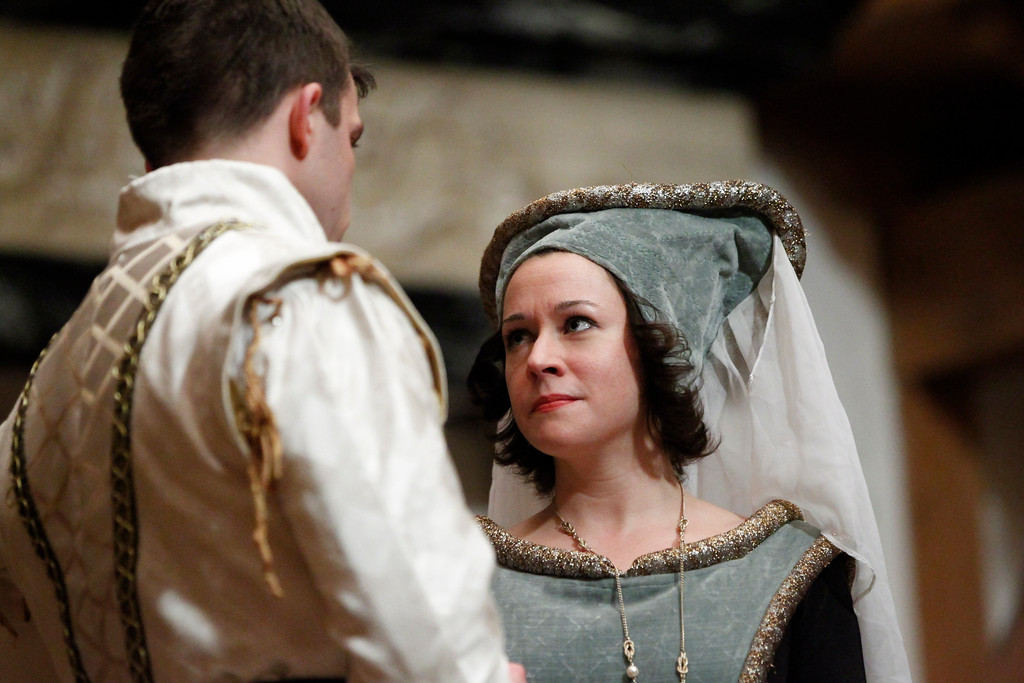 Gregory Jon Phelps and Miriam Donald in LOOK ABOUT YOU. 2011. 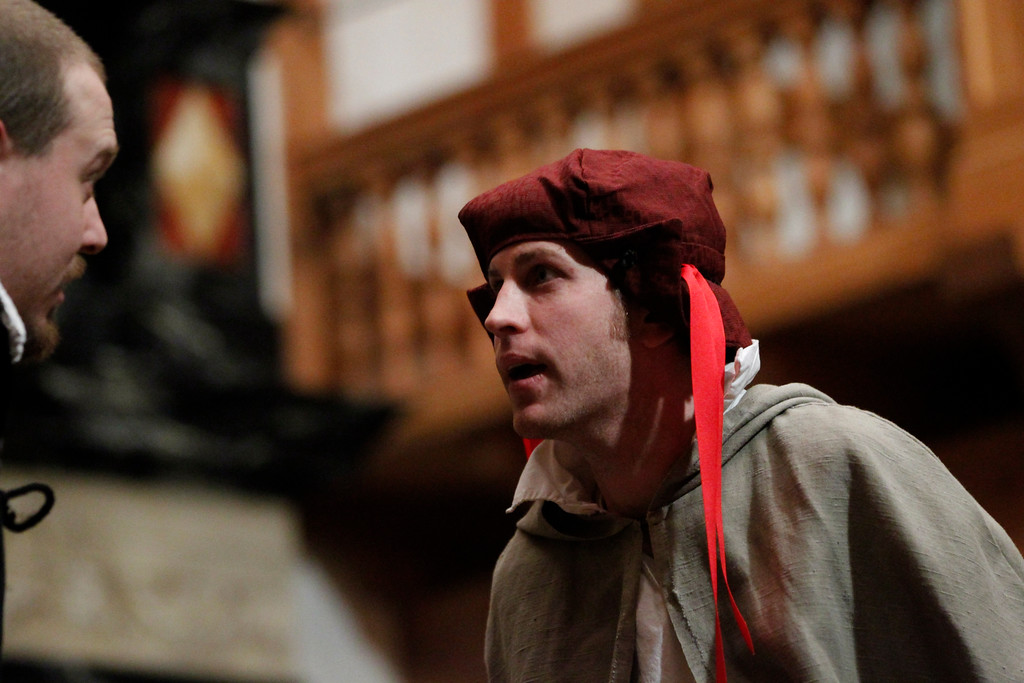 Benjamin Curns and Chris Johnston in LOOK ABOUT YOU. 2011. 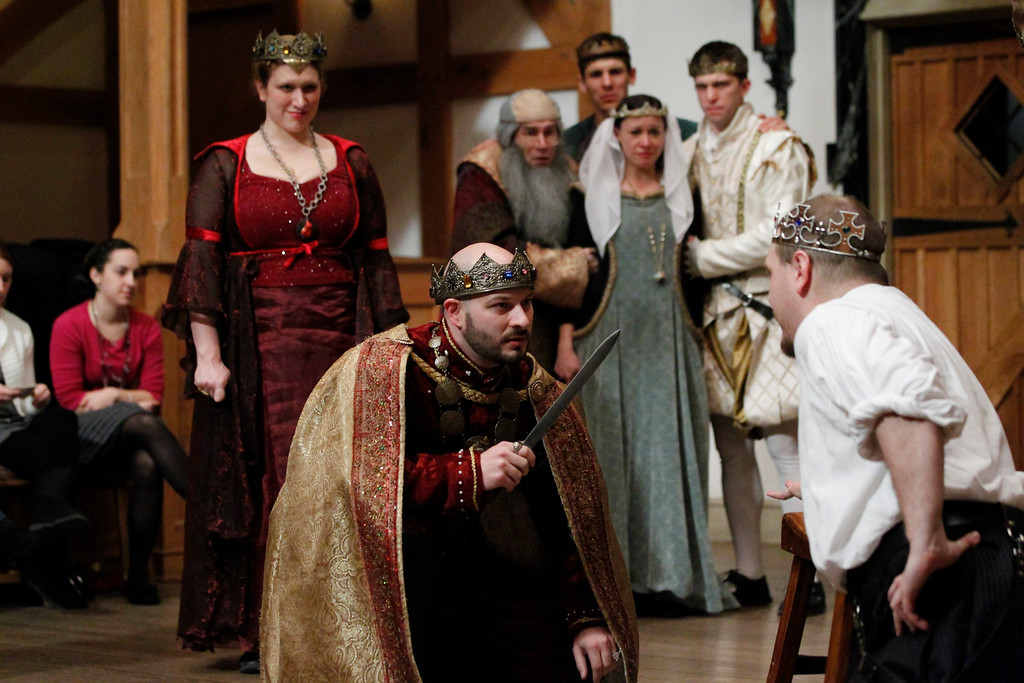 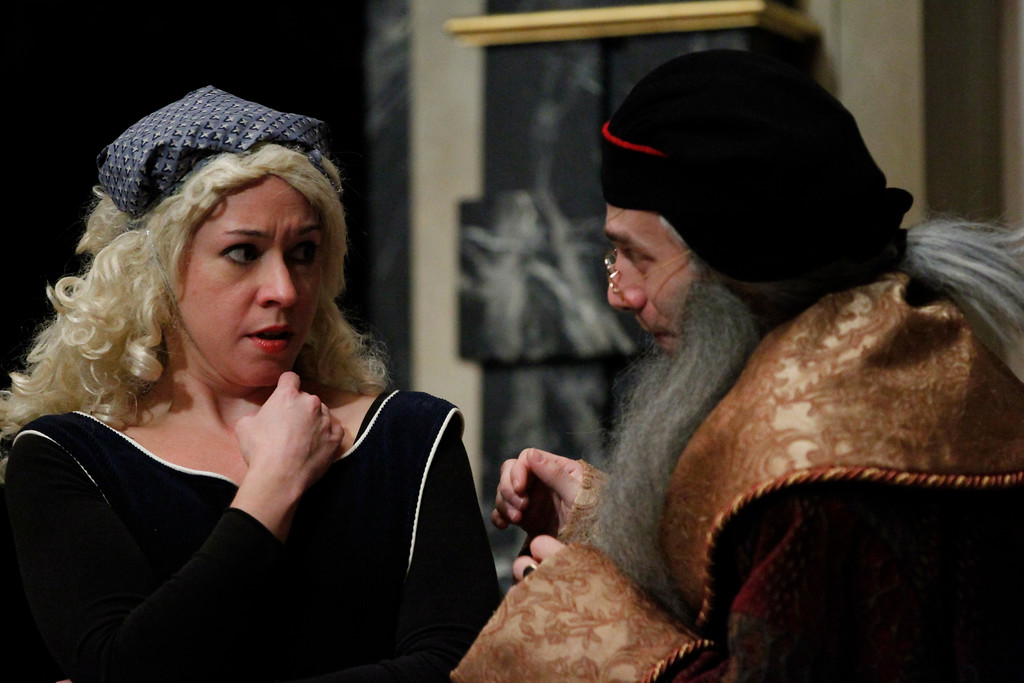 Miriam Donald and Paul Jannise in LOOK ABOUT YOU. 2011. 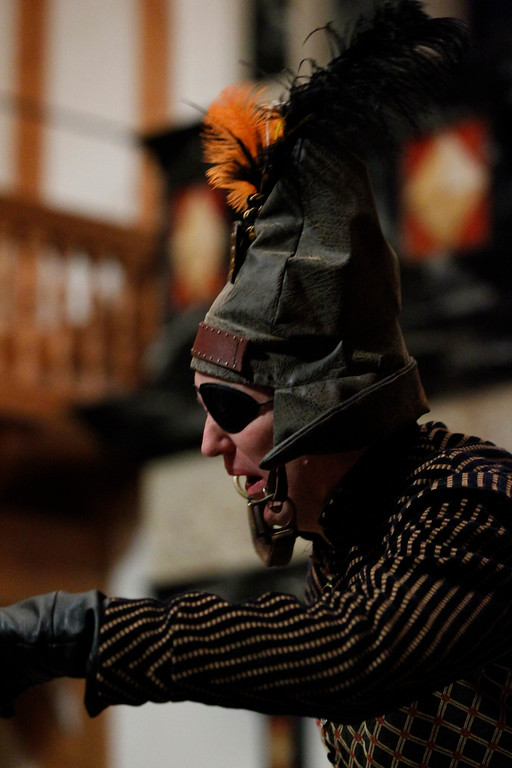 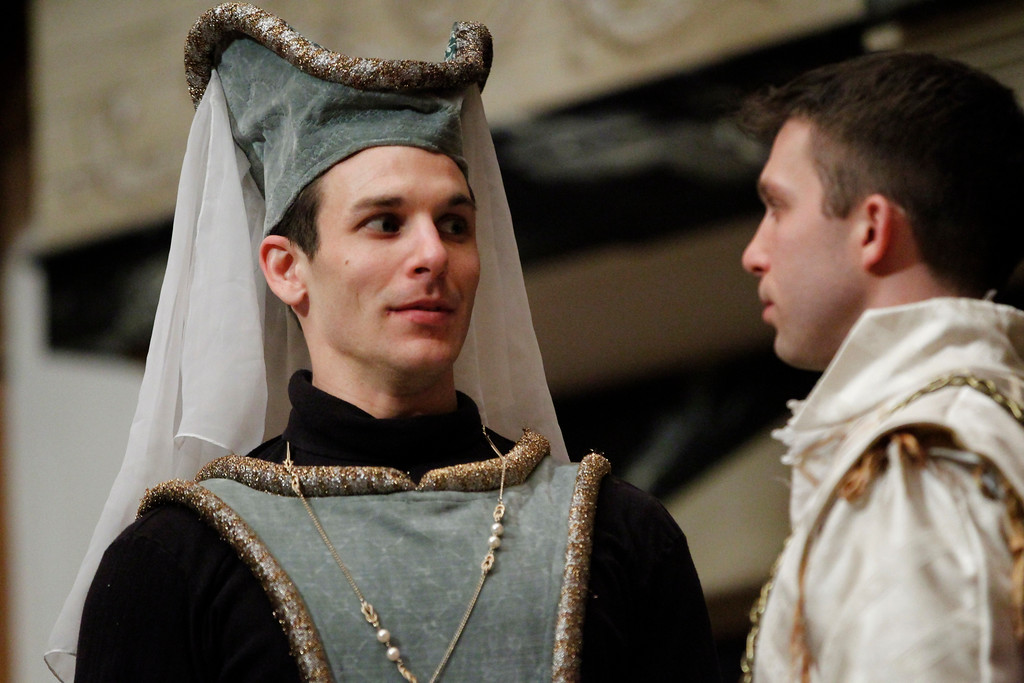 Patrick Midgley and Gregory Jon Harrell in LOOK ABOUT YOU. 2011. 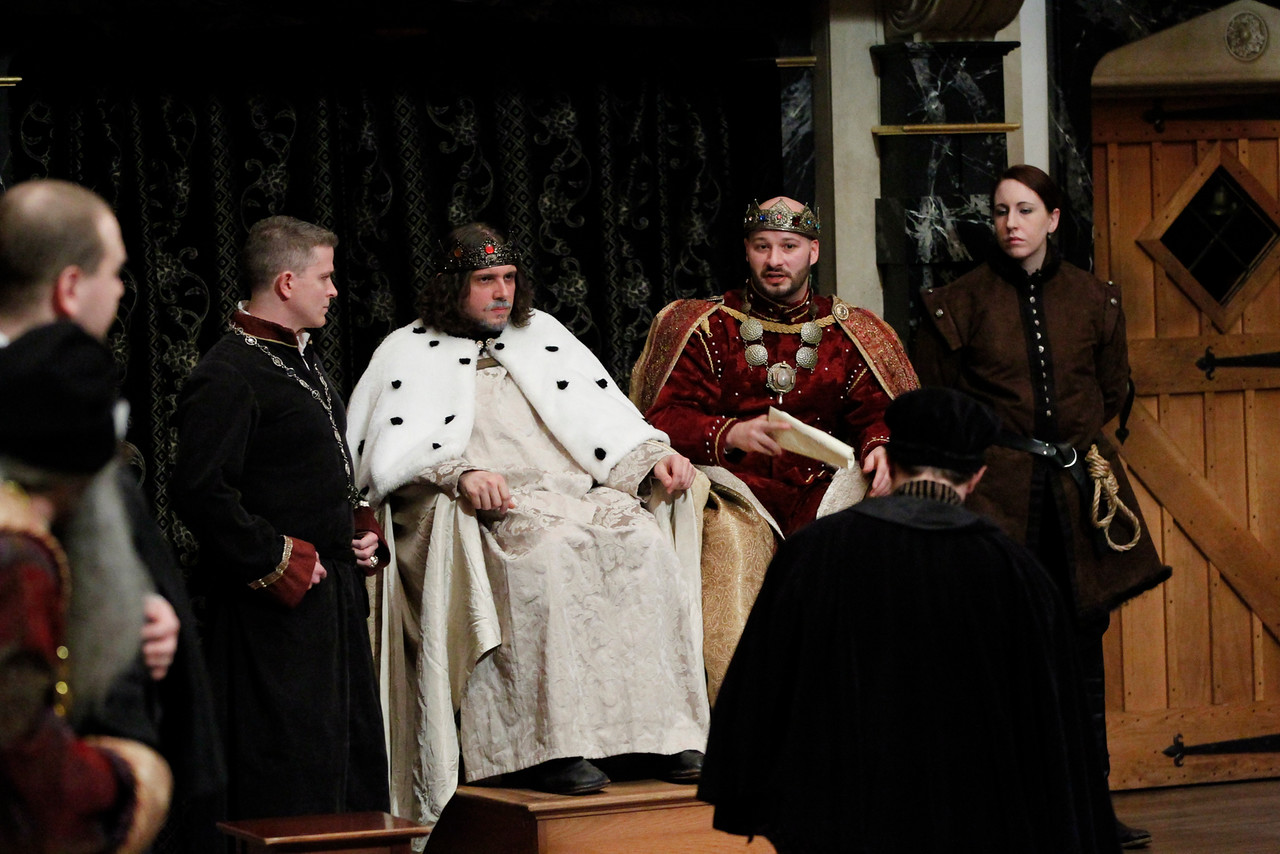 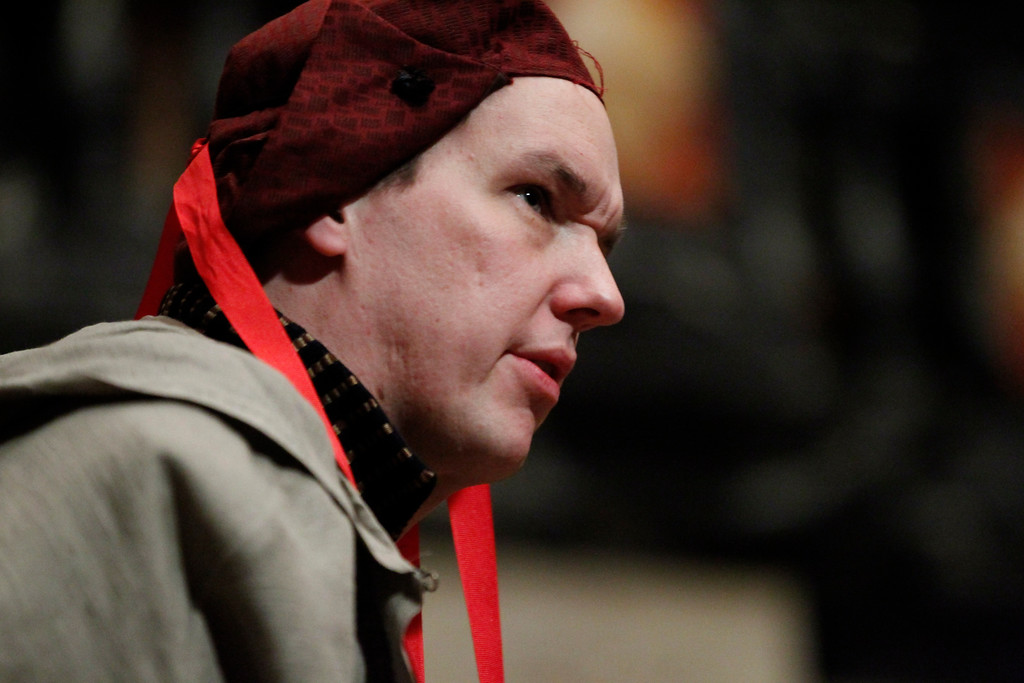 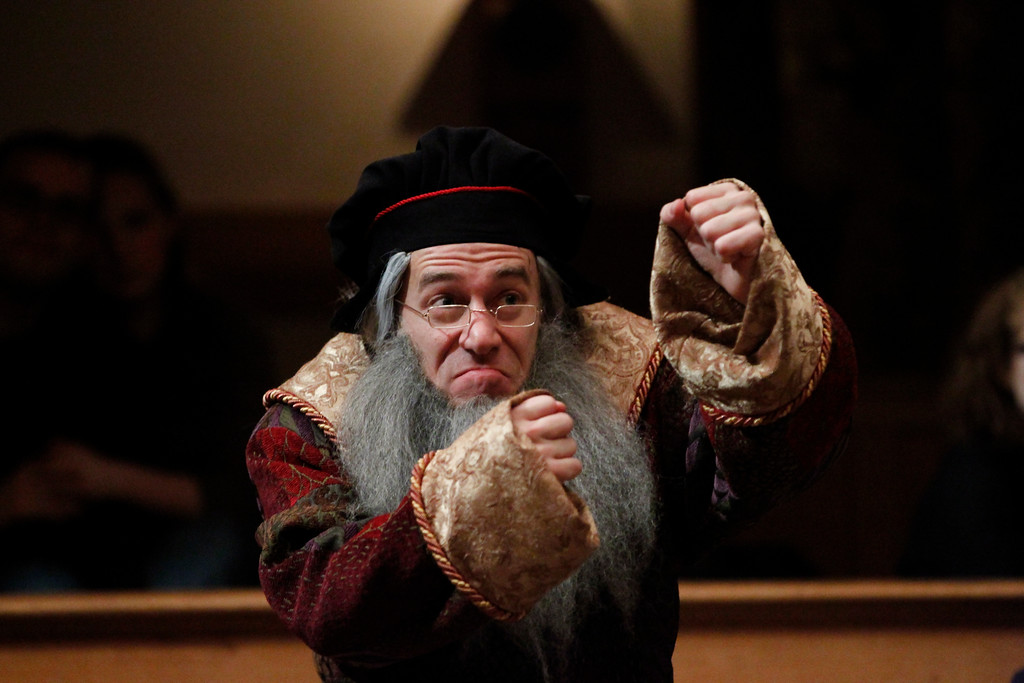 Benjamin Curns and Gregory Jon Phelps in LOOK ABOUT YOU. 2011.

2. Where was the play first performed?
At the Rose by the Lord Admiral’s Men, the chief competitors to the Lord Chamberlain’s Men, Shakespeare’s company.

4. How is this anonymous playwright like Shakespeare?
He likes the idea of disguise, of actors playing characters who themselves play parts (Rosalind, Henry V, Edmund, Petruchio, Viola).

5. How is this anonymous playwright unlike Shakespeare?
When it comes to disguise, one might argue that the playwright used too much of a good thing. No other play of the period has so much disguise in it. In fact, it may be that the play was also known as Disguises. Where Shakespeare’s plays might have two or three characters in disguise, all but two of the major characters in Look About You appear disguised, and Skink has eight different disguises. So, one thing to watch for in this Actors’ Renaissance Season production is how the company handles all this convention.

6. What do scholars think about this play? Perhaps because the play has not appeared on a professional stage for four centuries, scholars have had little to say about the play as a play. Interest has largely been in its handling of the Robin Hood material, and you can read a fine piece on that subject by Carole Levin in ASC’s online magazine, The Playhouse Insider.

7. Is there any controversy surrounding the work?
Not really. Obviously the question of authorship sparks speculation, but ??????

8. What characters should I especially look for?
The play’s great master of disguise is Skink, and how can you not pay attention to a character named “Skink”? The play is most famous for having Robin Hood in it, but the Robin Hood in this play is a far cry from Errol Flynn or even Russell Crowe.

9. What scene should I especially look for?
If you like the play’s marathon disguising, then you’ll especially enjoy the scene with two different characters disguised as the same hermit. This play also shares with Gary Taylor’s reconstruction of Shakespeare’s Cardenio the distinction of an onstage game of bowls.

10. What is the language like?
The language is easy to understand. The verse is primarily iambic pentameter, mostly end-stopped (thoughts usually conclude at the end of a line) with intermittent rhyme.