In Shakespeare’s brilliant, brutal, and innovative play, England’s royal cousins play a deadly game of thrones. The House of Lancaster, led by the fearsome Queen Margaret, plots revenge and counter-revenge against the House of York, led by Richard and his sons: Edward (who becomes King Edward IV), George, and Richard Duke of Gloucester (who will become King Richard III). Patricide, filicide, regicide, extreme cruelty, and fierce love: Shakespeare holds nothing back in the thrilling final chapter in the life of King Henry VI. 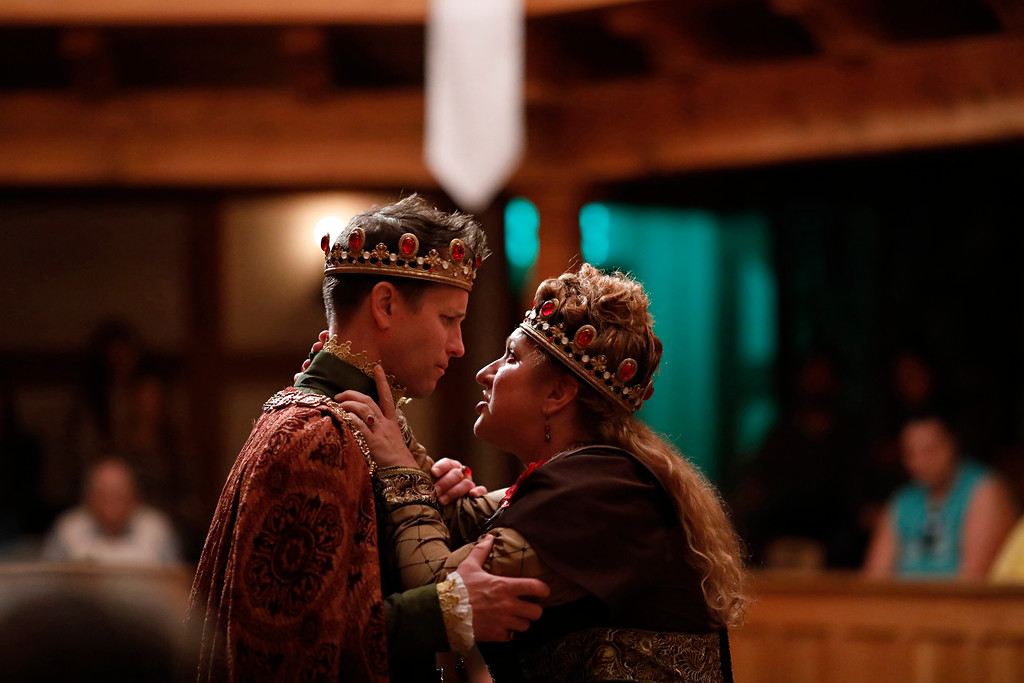 Chris Johnston and Allison Glenzer in THE FALL OF KING HENRY. Photo by LINDSEY WALTERS. 2017. 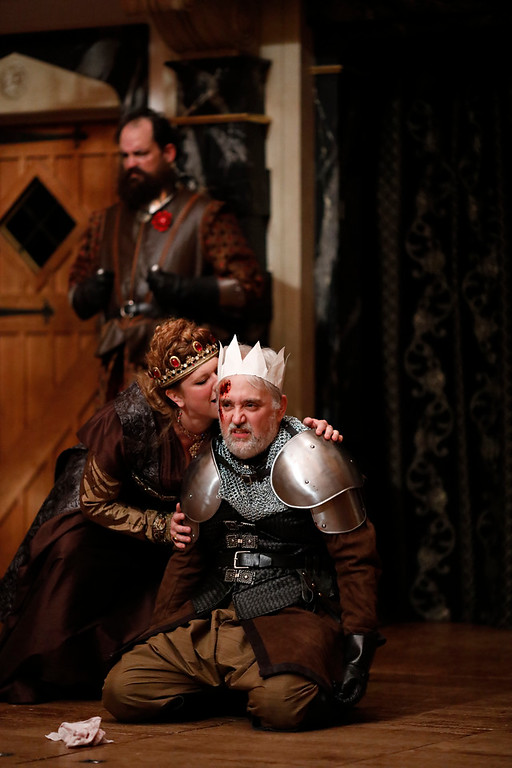 Allison Glenzer and Christopher Seiler in THE FALL OF KING HENRY. Photo by LINDSEY WALTERS. 2017. 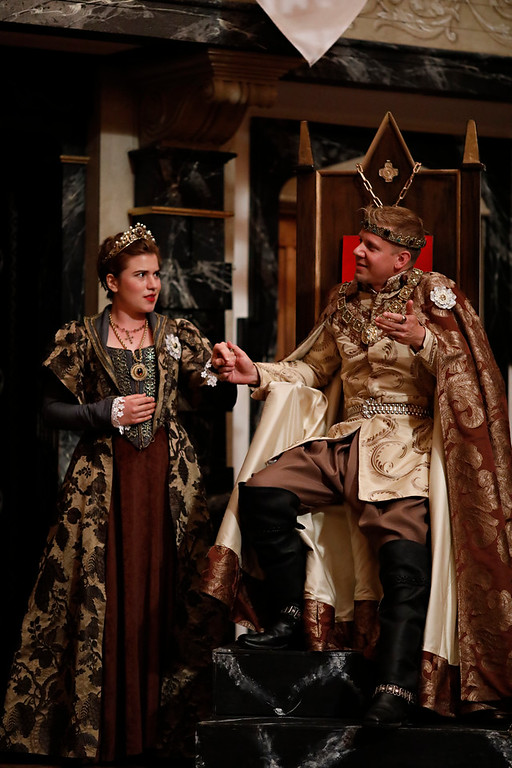 Allie Babich and Benjamin Reed in THE FALL OF KING HENRY. Photo by LINDSEY WALTERS. 2017. 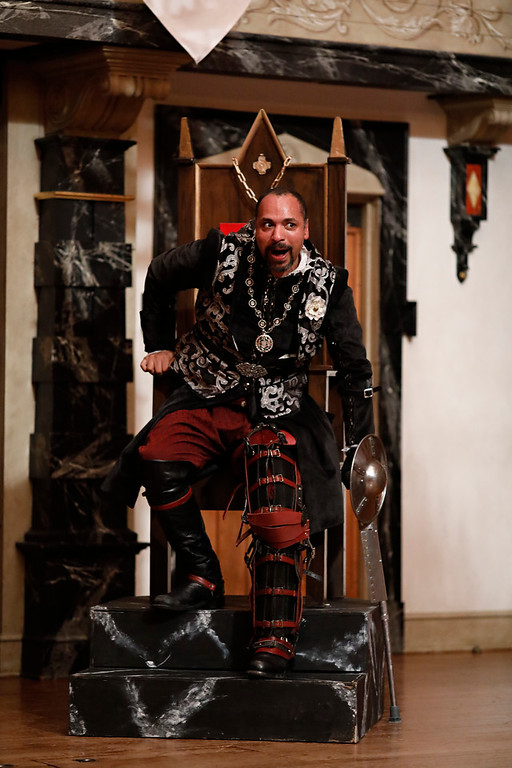 René Thornton, Jr. in THE FALL OF KING HENRY. Photo by LINDSEY WALTERS. 2017. 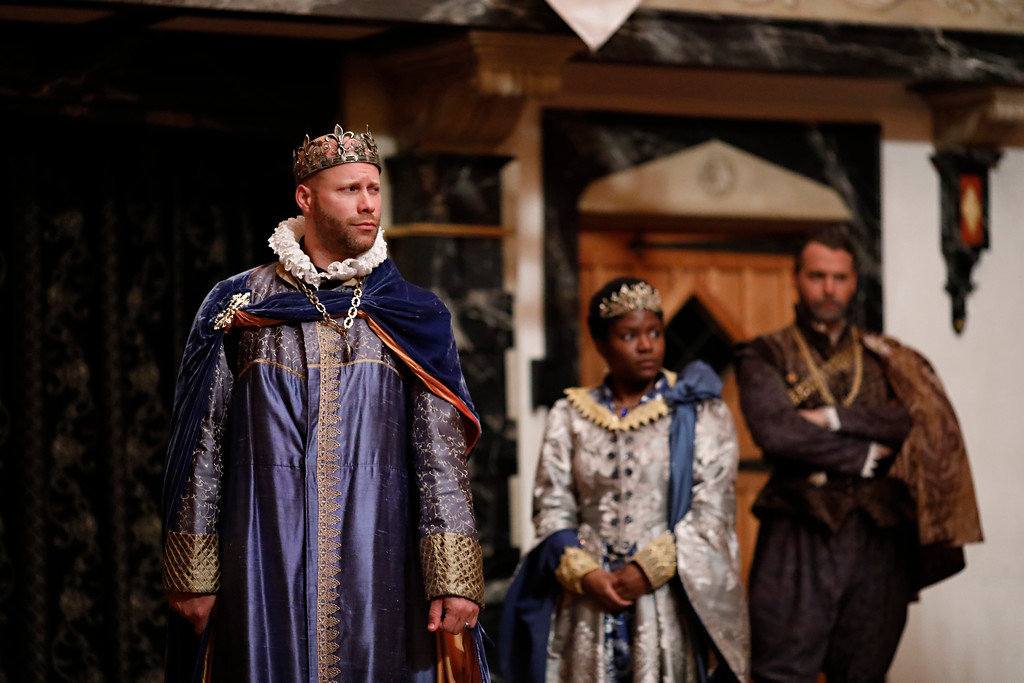 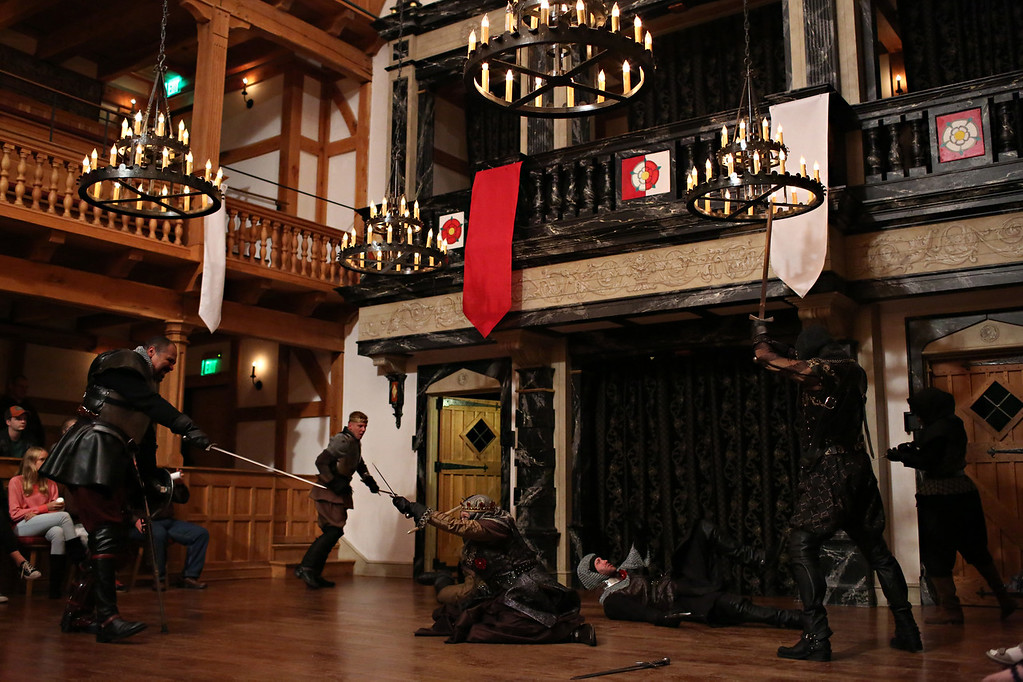 The cast of THE FALL OF KING HENRY. Photo by LINDSEY WALTERS. 2017. 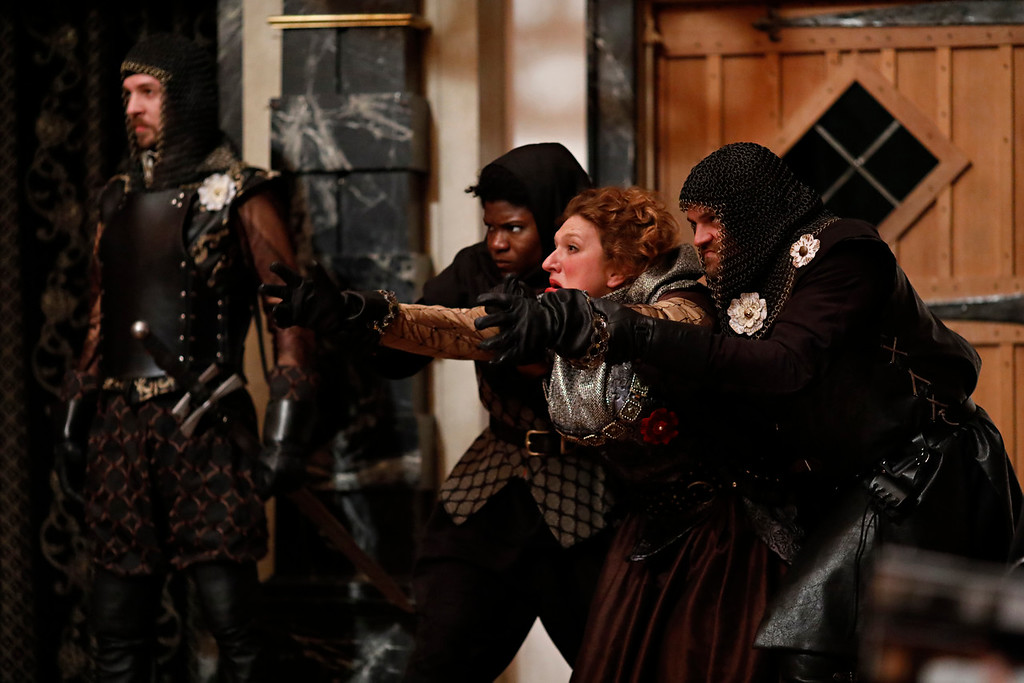 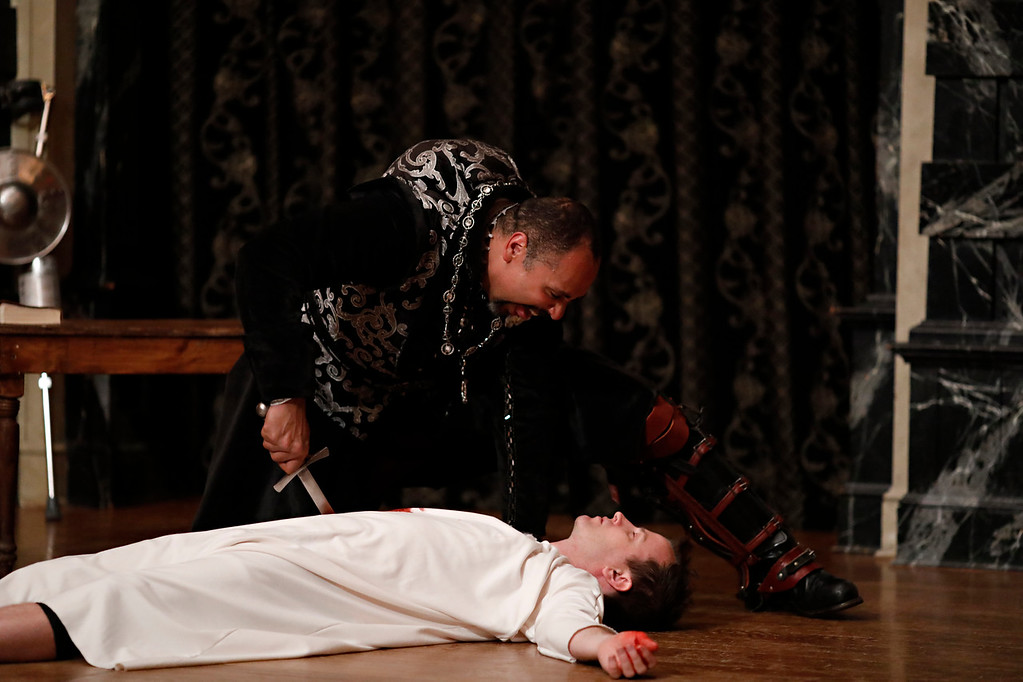 René Thornton, Jr. and Chris Johnston in THE FALL OF KING HENRY. Photo by LINDSEY WALTERS. 2017. 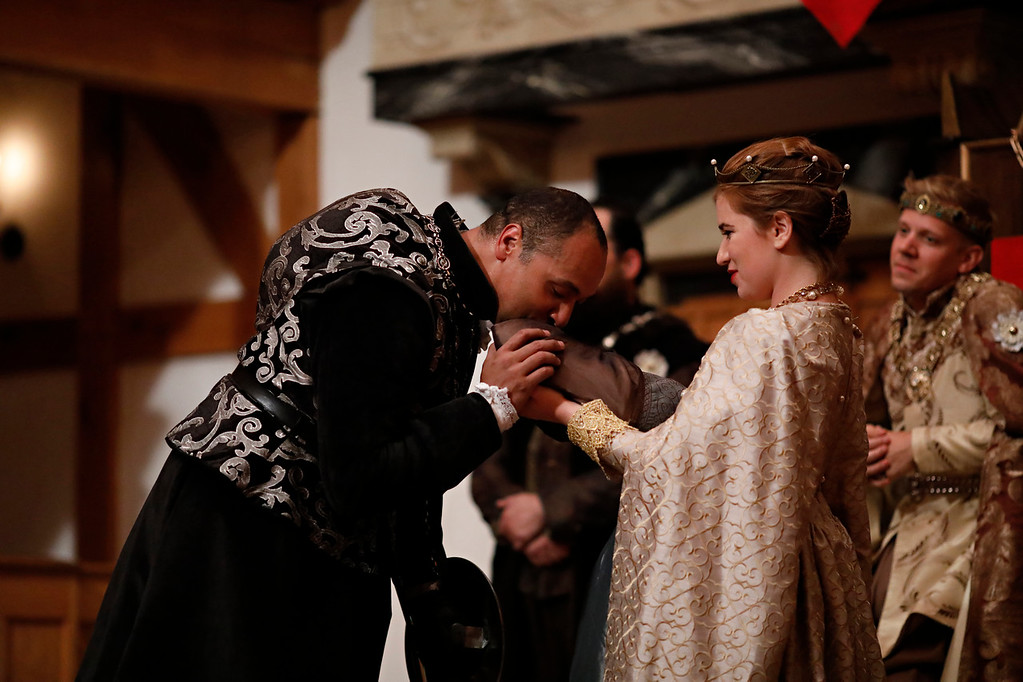 René Thornton, Jr and Allie Babich in THE FALL OF KING HENRY. Photo by LINDSEY WALTERS. 2017.

Stuff that Happens Before the Play

(and Rosebud is the name of Citizen Kane’s sled)

Shakespeare’s three plays that cover the reign of King Henry the Sixth have not gotten the love they deserve over the years. Maybe the reason is that some scholars believe  1H6 was co-authored by Thomas Nashe (and/or others). Perhaps it’s that some scholars believe 2H6 and 3H6 were written first and then Shakespeare wrote 1H6 as a prequel. Or maybe some elitist folks are just snobbish about the “baseness” in the large number of fights, skirmishes, and broad battle scenes that seem to be inspired by the box office blockbuster Tamburlaine the Great by Christopher Marlowe. Maybe it’s that the titles of these plays usually have a Roman numeral and a “Part” in them. Whatever the criticisms may be, our mission with this production is to entertain your socks off with the climactic closing chapter of Shakespeare’s King Henry the Sixth trilogy (which is also the prequel to Shakespeare’s own box office bonanza play about King Richard the Third). Call this third chapter: The Return of the Hunchback.

One of the many joys that comes with producing these Henry the Sixth plays for you in successive years with a true rotating repertory troupe is the opportunity to give great actors some great roles into which they can sink their teeth over multiple years in multipleplays. Chris Johnston returns as the beleaguered King Henry (maybe you saw him as Gratiano in The Merchant of Venice this past Ren Season, or as Crumpet the Elf in The Santaland Diaries in December, or as Feste in Twelfth Night or the Fool in King Lear last year at this time). Allison Glenzer returns as Henry’s fierce Queen Margaret (perhaps you saw her as Scrooge in our 2015 A Christmas Carol, or as Mary in The Twelve Dates of Christmas, or last Summer/Fall Season as the Storyteller in Bloody Bloody Andrew Jackson and Olivia in Twelfth Night). René Thornton, Jr. returns as “that valiant crook-backed prodigy Dicky” (perchance you spied him as the title character in Coriolanus or King Lear or as Malvolio). If you’ve never seen any of these three brilliant actors before, you are in for a treat that will make you want to see them again. OR, if you’ve seen these Shakespeare rock stars many times in multiple dozens of plays over the last decade- plus here at the Blackfriars, you’re primed in a manner similar to watching one of your favorite sports figures play first-string in the ultimate all-star game.

While some fans have seen Robert Downey, Jr. play Iron Man in every Marvel movie, each film and each story stands on its own. If you’re new to the ASC and have not seen the earlier chapters of the Henry the Sixth saga, don’t sweat it, you’ll be fine. This play is Iron Man plays a Game of Thrones in a House of Cards as everyone considers himself or herself the Avengers hero in this righteous battle for power and glory. Enjoy the ride.

Pro tips: When Edward becomes King, he gives his brother, George, the title of Duke of Clarence and his other brother, Richard, the title Duke of Gloucester. As a result, George is called Clarence, and Richard is called Gloucester.

Find additional notes from the director online at http://bit.ly/ASC-3H6