Rumors abound in this searing comedy of manners, where no one can avoid the stinging bite of gossip – even when the truth is sometimes juicier. A rich guardian tests his wards to choose the worthier heir, but there’s more to them than meets the eye. Throw in a few scandal-mongers, a wandering wife, and a sneaky hireling named Snake, and A School for Scandal will have you rolling in you seat. (How undignified.) 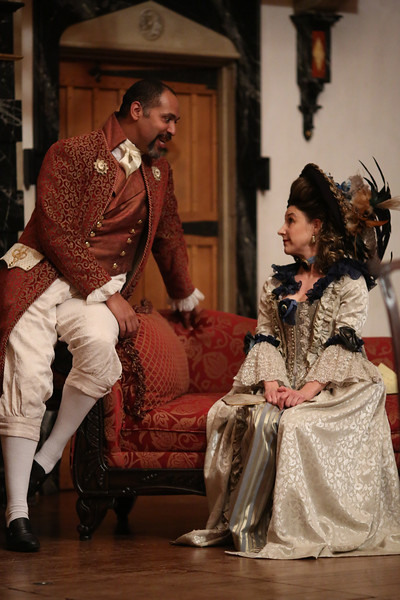 René Thornton, Jr. and Ginna Hoben in THE SCHOOL FOR SCANDAL. Photo by LINDSEY WALTERS. 2017. 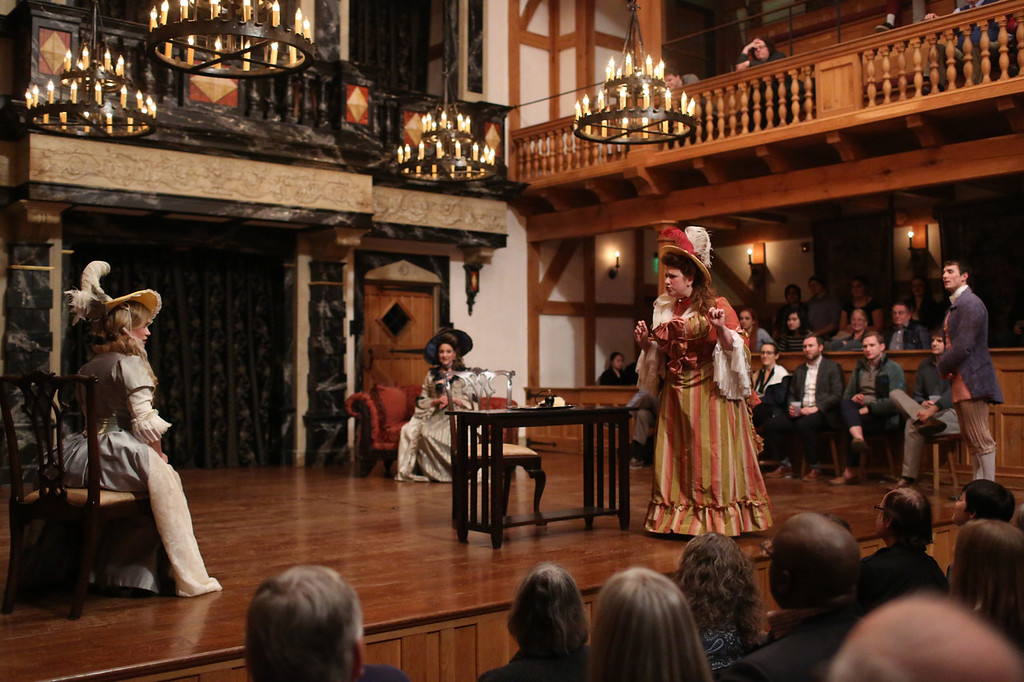 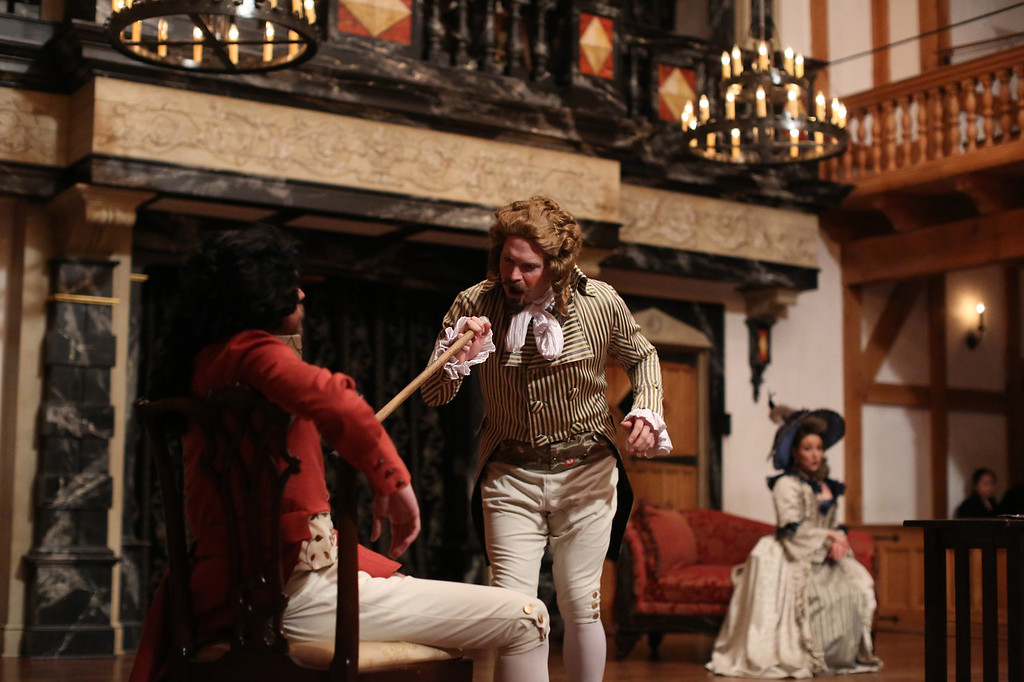 Tim Sailer, Josh Innerst, and Ginna Hoben in THE SCHOOL FOR SCANDAL. Photo by LINDSEY WALTERS. 2017. 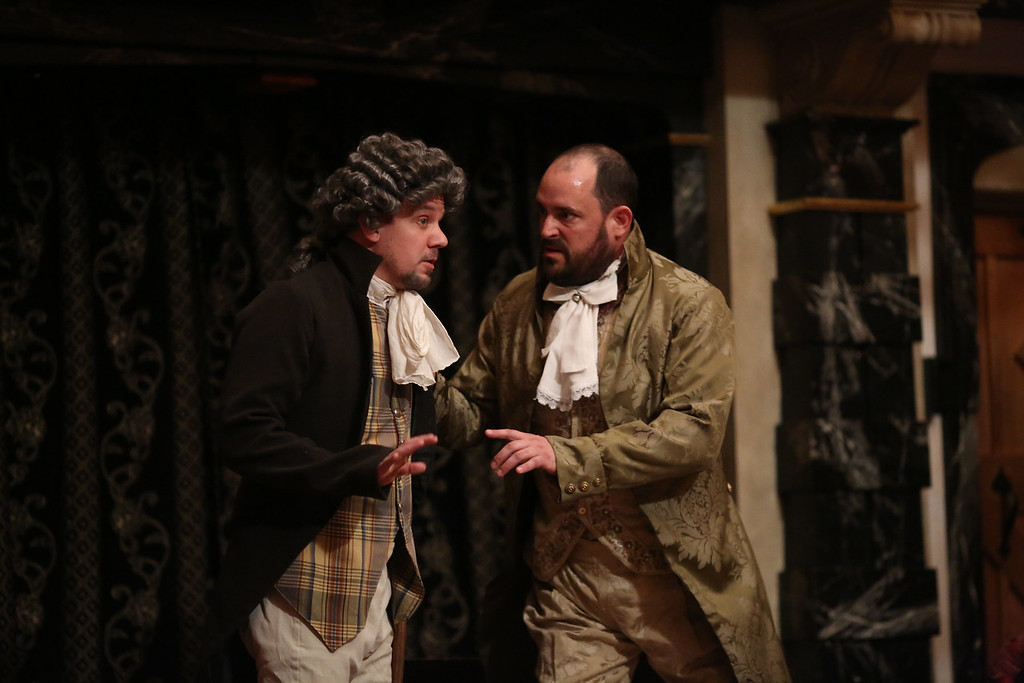 Benjamin Reed and David Anthony Lewis in THE SCHOOL FOR SCANDAL. Photo by LINDSEY WALTERS. 2017. 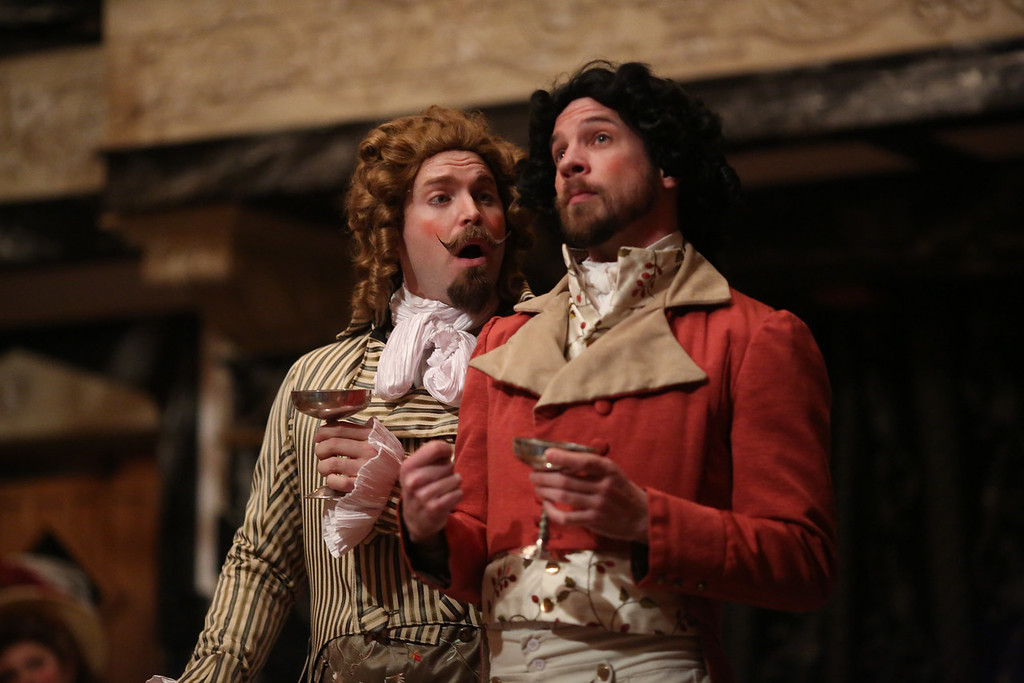 Josh Innerst and Tim Sailer in THE SCHOOL FOR SCANDAL. Photo by LINDSEY WALTERS. 2017. 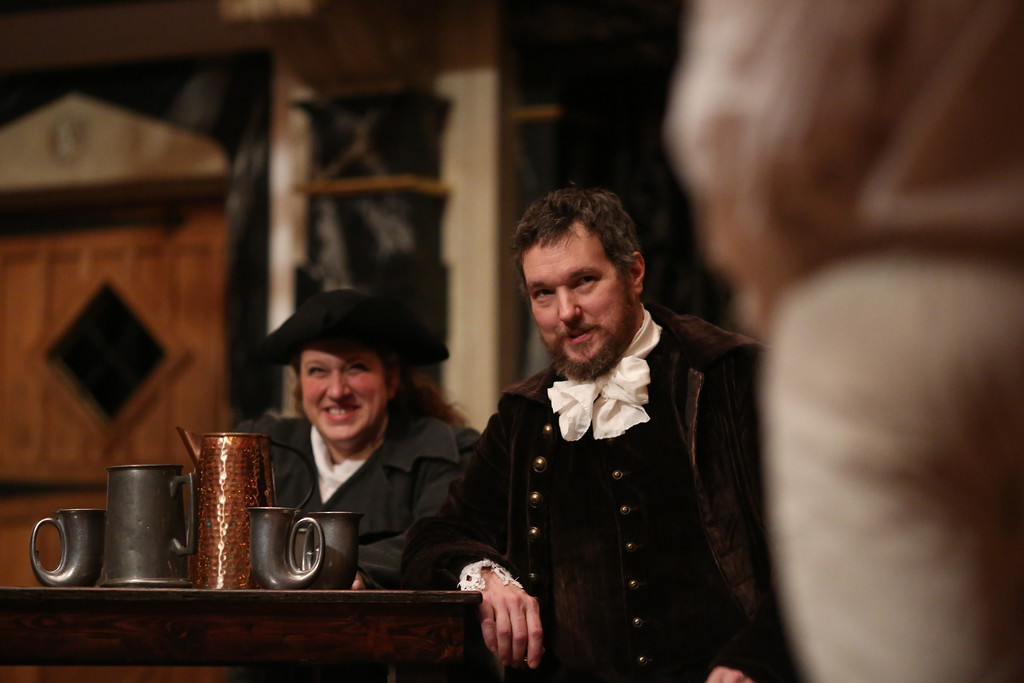 Allison Glenzer and John Harrell in THE SCHOOL FOR SCANDAL. Photo by LINDSEY WALTERS. 2017. 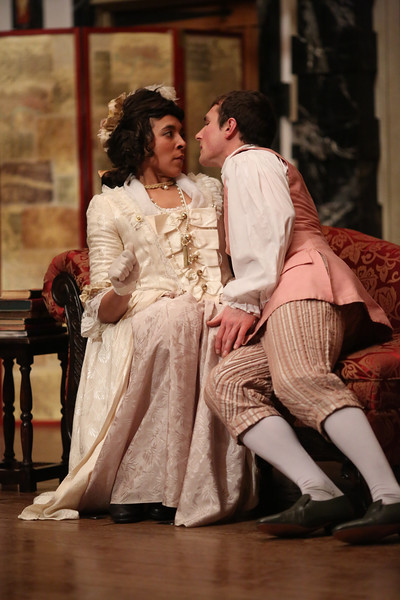 Jessika Williams and Grant Davis in THE SCHOOL FOR SCANDAL. Photo by LINDSEY WALTERS. 2017. 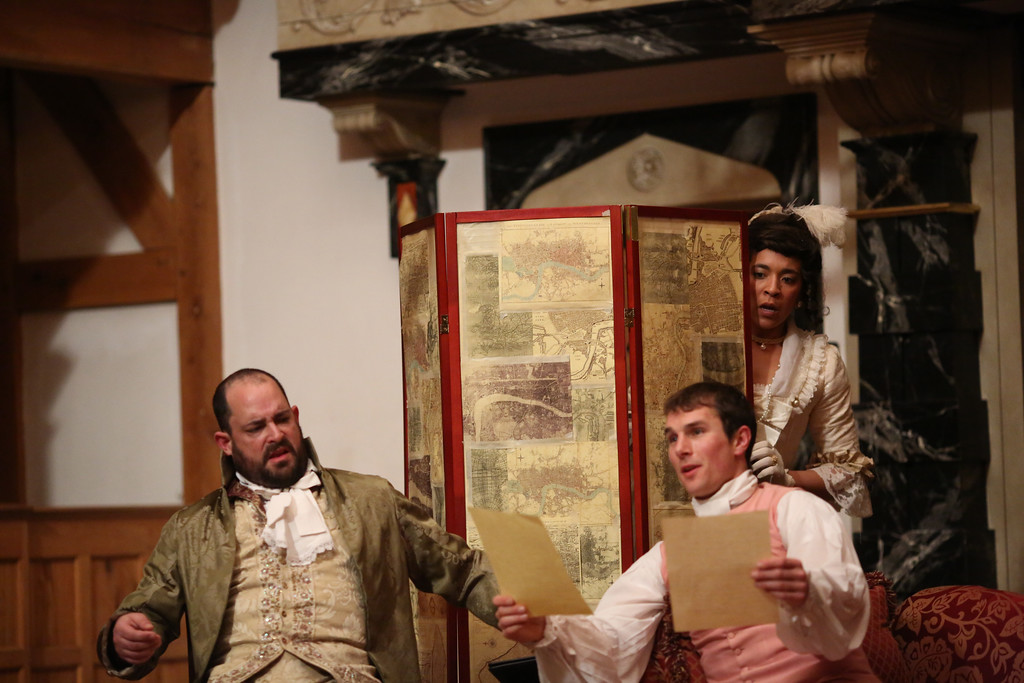 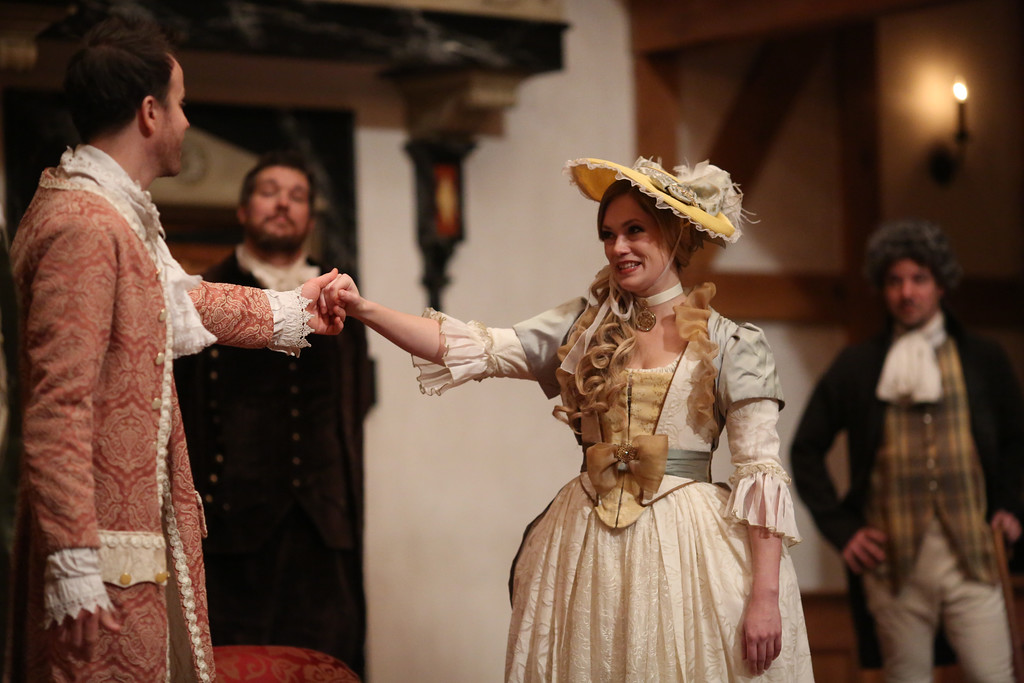 Chris Johnston and Lauren Ballard in THE SCHOOL FOR SCANDAL. Photo by LINDSEY WALTERS. 2017.

2. Where was the play first performed?
At the Drury Lane theatre in London.

3. Who wrote it?
Richard Brinsley Sheridan, born in Dublin in 1751, lived a remarkable life. The survivor of two duels (won the first, lost the second) over the honor of the woman he would marry,at twenty-four years old Sheridan staged The Rivals. It failed opening night, so Sheridan rewrote it, changed the lead actor, and reopened the play to great acclaim. He followed that success with three hits, The Scheming Lieutenant, The School for Scandal, and the great theatrical satire, The Critic. Despite his success, in 1780 he stopped writing plays to become a Member of Parliament. By then he owned the Drury Lane theatre, and during the fire that destroyed it in 1809, said to a friend, surprised to see him watching the fire with drink in hand, “A man may surely be allowed to take a glass of wine by his own fireside.” He served for 33 years as a member of parliament who strongly supported American independence. That support earned him the gratitude of the U.S. Congress, who, when he fell on hard times later in his life, offered him a gift of $20,000, which he declined. He died poor in 1816 and was buried in Westminster Abbey’s Poets’ Corner.

4. How is this playwright like Shakespeare?
Like all good playwrights, Sheridan shared with Shakespeare a love of words, and, reading this play, you can imagine that Shakespeare’s comedies, particularly Much Ado and the exchanges between Beatrice and Benedick, were influential.

5. How is this playwright unlike Shakespeare?
Sheridan’s brief career as a playwright produced only witty comedies of manners (think Much Ado in wigs). For Shakespeare, plays seemed to have been an end in themselves; for Sheridan they were a means to an end.

6. What do scholars think about this play?
They rank The School for Scandal among the four or five great English Comedies of Manners, plays about a witty and fashionable high society – a genre that began during the Restoration and lasted through much of the 18th Century.

7. Is there any controversy surrounding the work?
Coincidentally, in a season when we are also presenting The Merchant of Venice, the character of Moses, a Jewish moneylender in The School for Scandal, has drawn charges of anti-Semitism. Seeing the two plays in the same season will give you an opportunity to judge for yourself. You will see that Shakespeare’s treatment of the issue is much more central to any discussion of Merchant than Sheridan’s offhand use of stereotyping.

8. What characters should I especially look for?
It’s hard to choose with names such as Lady Sneerwell, Snake, Lady Teazle, Mrs. Candour, and Benjamin Backbite, but pay particular attention to the two Surface brothers, Joseph, the seemingly commendable young man, and Charles, the prodigal partier.

9. What scene should I especially look for?
They’re all pretty delicious, but the party and portrait sale in Act Three and the “little French Milliner” behind the dressing screen in Act Four have achieved a special status for delight in theatre lore.

10. What is the language like?
Too scintillating to miss a syllable.