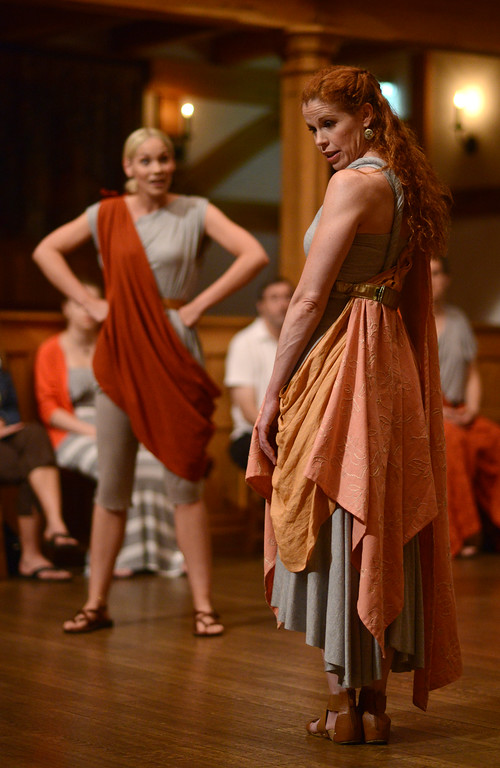 Tracie Thomason and Lee Fitzpatrick in TROILUS AND CRESSIDA. Photo by PAT JARRETT. 2013. 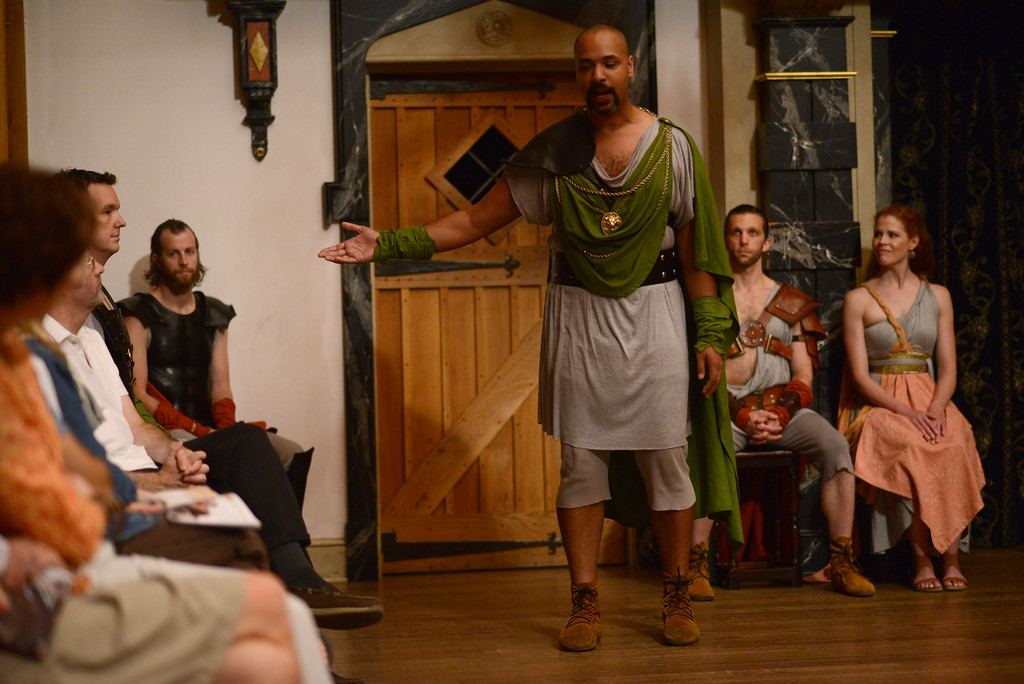 René Thornton, Jr. and the cast of TROILUS AND CRESSIDA. Photo by PAT JARRETT. 2013. 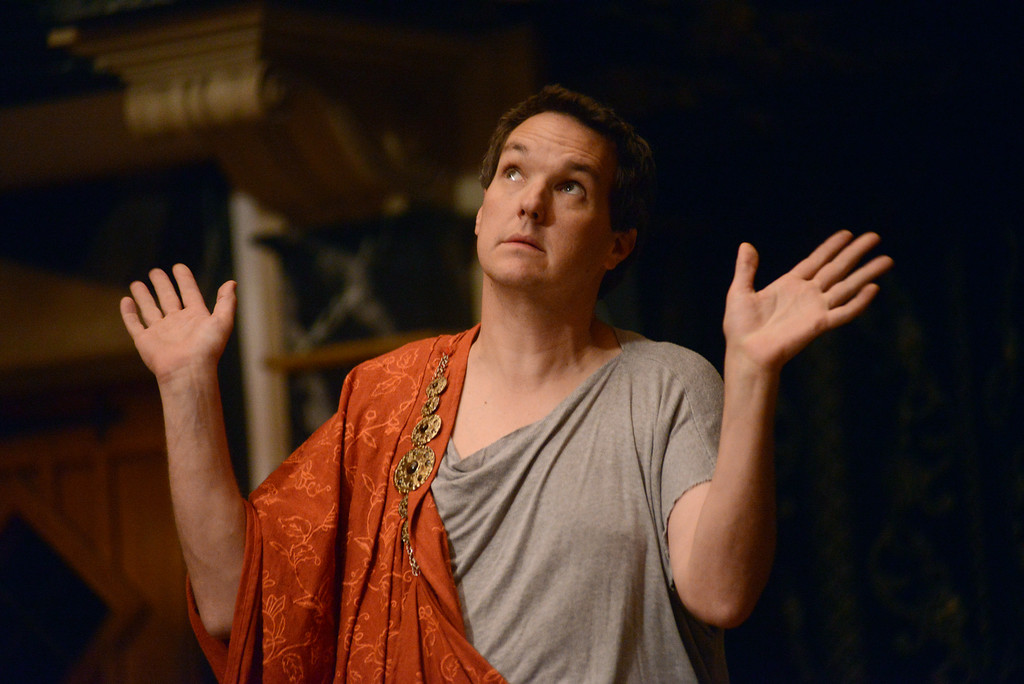 John Harrrell in TROILUS AND CRESSIDA. Photo by PAT JARRETT. 2013. 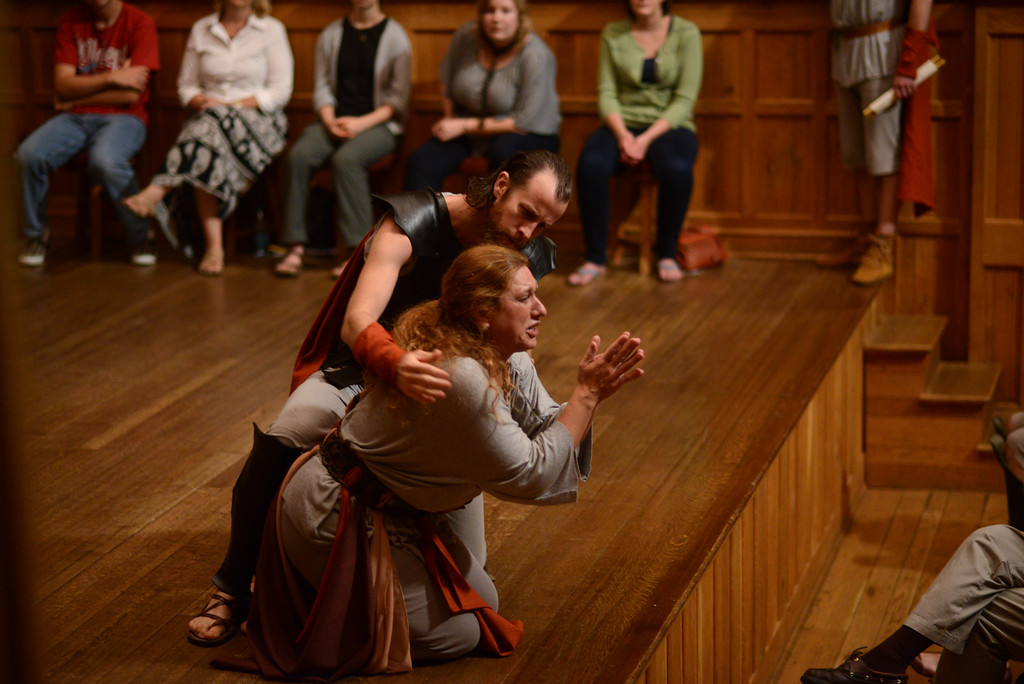 Chris Johnston and Allison Glenzer in TROILUS AND CRESSIDA. Photo by PAT JARRETT. 2013. 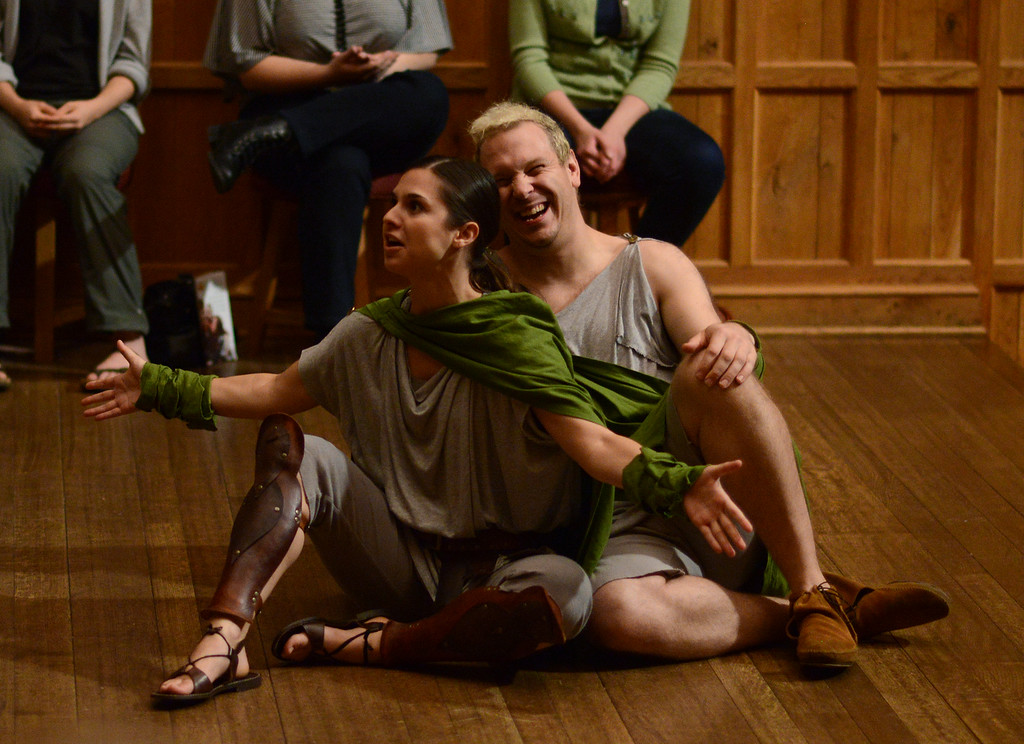 Emily Brown and Benjamin Curns in TROILUS AND CRESSIDA. Photo by PAT JARRETT. 2013. 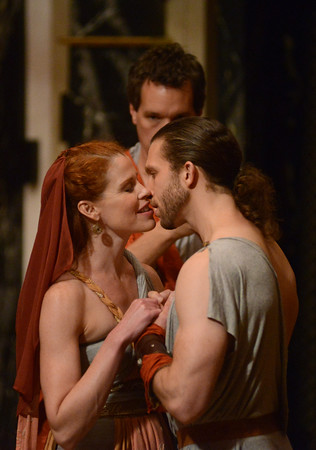 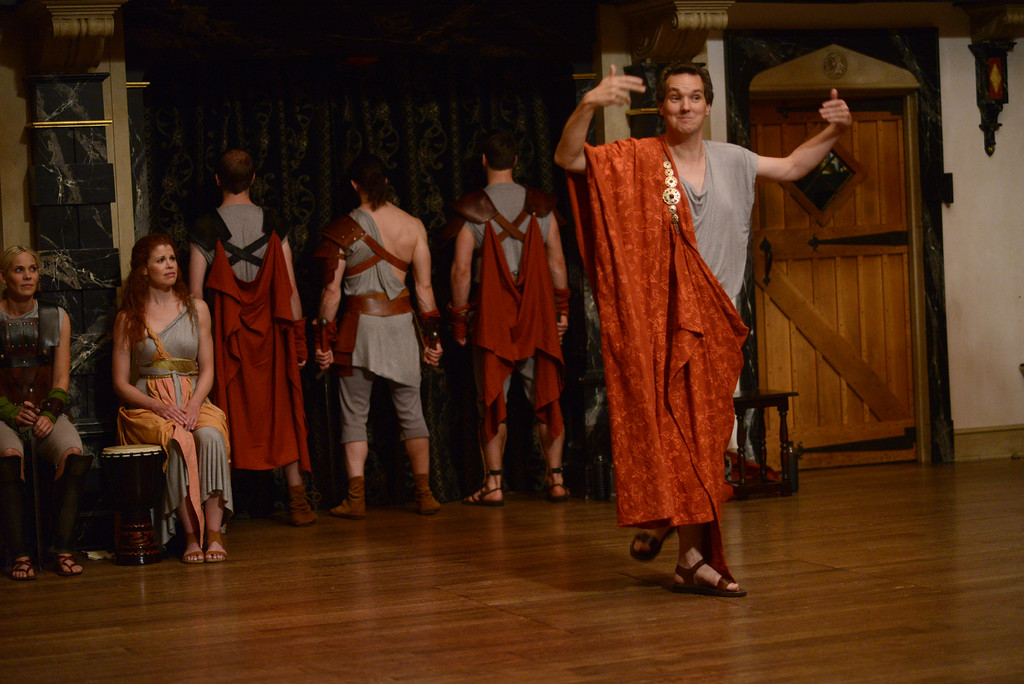 John Harrell and the cast of TROILUS AND CRESSIDA. Photo by PAT JARRETT. 2013. 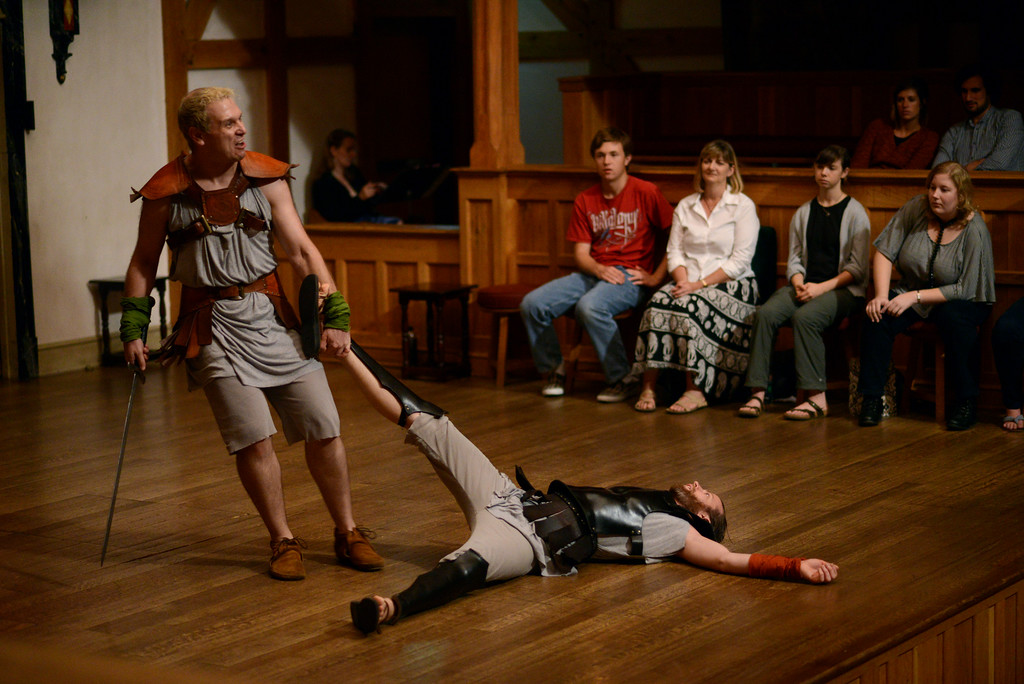 Benjamin Curns and Chris Johnston in TROILUS AND CRESSIDA. Photo by PAT JARRETT. 2013.

Troilus and Cressida has been an enigma in many ways, dating back to its first printing. It was registered for publication in 1603, but not printed until 1609. Two different quarto title pages were published in 1609, one that says the play was acted by Shakespeare’s company at the Globe, while the other states that the play was never acted; one calls the play a “Historie” while the advertising text below that title calls it a comedy several times. When it was printed in the 1623 First Folio, it was not listed in the table of contents and was inserted between the Histories and the Tragedies without proper page numbers. Many scholars believe T&C was a last-minute addition to the First Folio and that getting this play prepped caused a delay in getting that first “complete works” finished.

From these curious beginnings, we come to the content of the play, which also defies labels/genres/styles. The action of the play starts seven years into the Trojan War and draws heavily from the events in Homer’s 9th century masterpiece, The Iliad, as well as from Chaucer’s 14th century prose version of the war. Shakespeare focuses more on the star-crossed fate of the title
characters in love than the battles. Many critics think it’s Shakespeare’s great satire of love and war, revealing the grand futility of fighting and the ultimate fickleness of the heart. The tone of the play shifts wildly between cynicism, idealism, buffoonery, romance, and flat-out comic genius.

These issues have led scholars to call it “Shakespeare’s most modern play” and have inspired directors to iron out the ambiguities to present a heavy-handed, single interpretation that defines the play in simple ways for the audience. T&C is the thirtieth Shakespeare title I’ve directed in twenty-five years. And the longer I get to direct Shakespeare’s plays, the more I am inspired to go the opposite way and mine the text for every juicy bit of ambiguity and serve up all the beautiful mess of humanity we can find. Shakespeare’s greatness allows him to paint characters in ways that allow actors to give performances that defy labels and cause audience members to argue over who’s right, who’s wrong, who’s the hero, who’s the villain, and what the play/production is trying to say to us today. T&C – perhaps
more than any other Shakespeare play – provides directors, actors, and audiences a cornucopia of protagonists/ antagonists, shifting styles, and multiple points of view. Prepping to direct this play has been thrilling.

In addition to embracing all the shades of gray in the play, this production will be special in the way that we are staging it. Here’s what I wrote to the actors before we started rehearsals:

In celebration of the ASC’s 25th Anniversary:

This kind of staging makes for a dynamic style that we haven’t done for a lot of years…I’m excited to embark on this adventure with this play with this team.

We are still months away from starting rehearsals, but I can’t wait to dive into the deep end and discover more treasures for us to share with you.