Shakespeare’s profound exploration of the meaning of human life, King Lear is both timeless and unnervingly contemporary. A penetrating family drama and powerful political commentary, Lear’s relentless gaze at man’s frailty and inhumanity conveys the necessity, sanctity, and strength of human love. 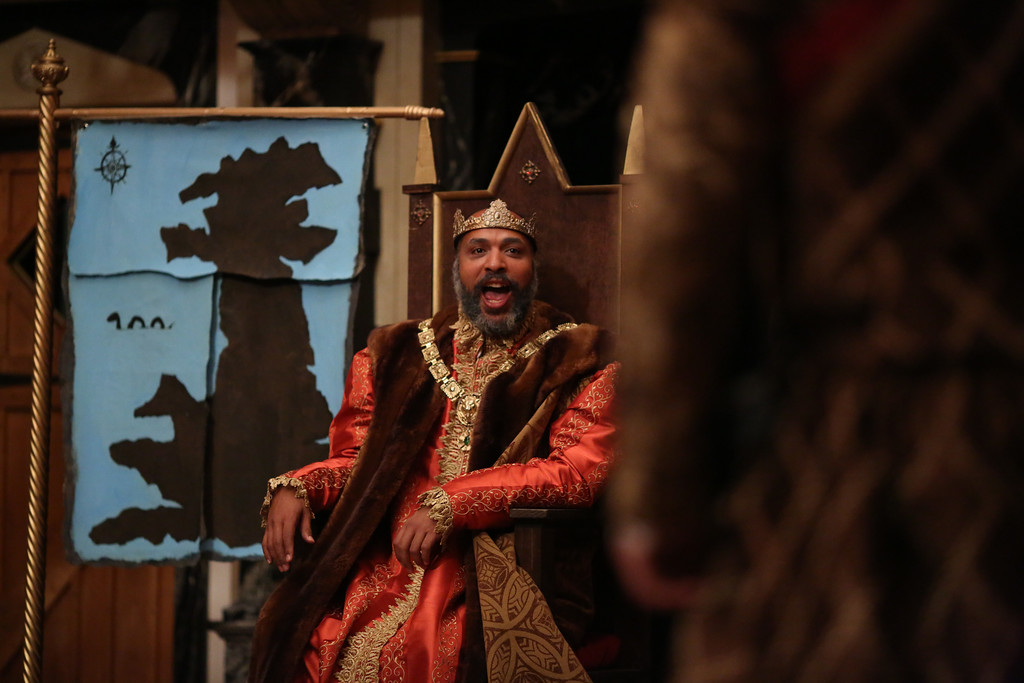 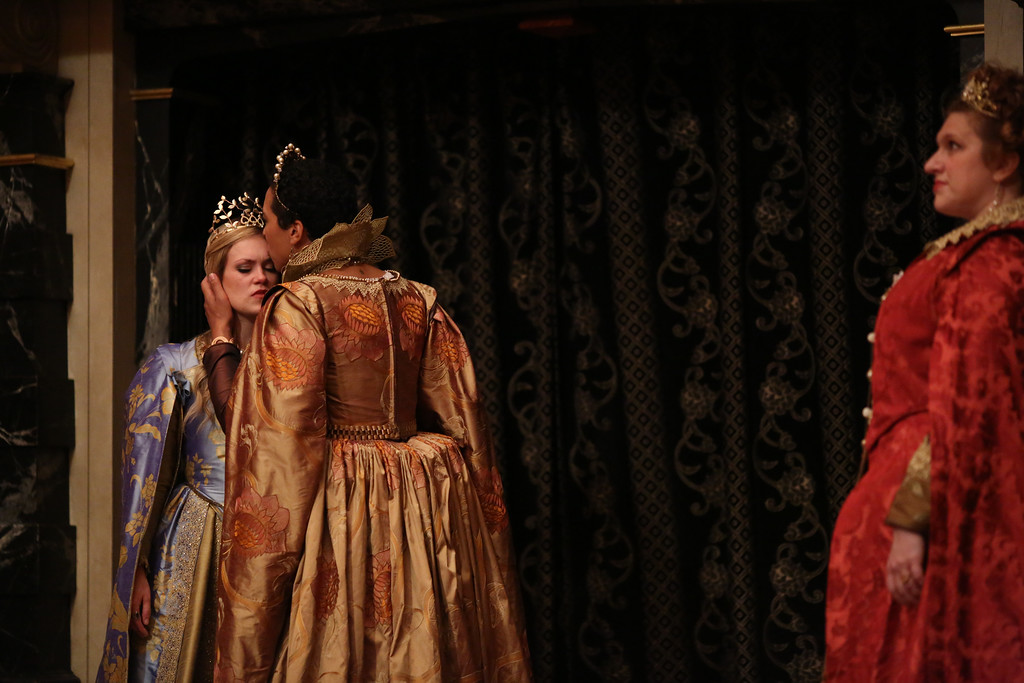 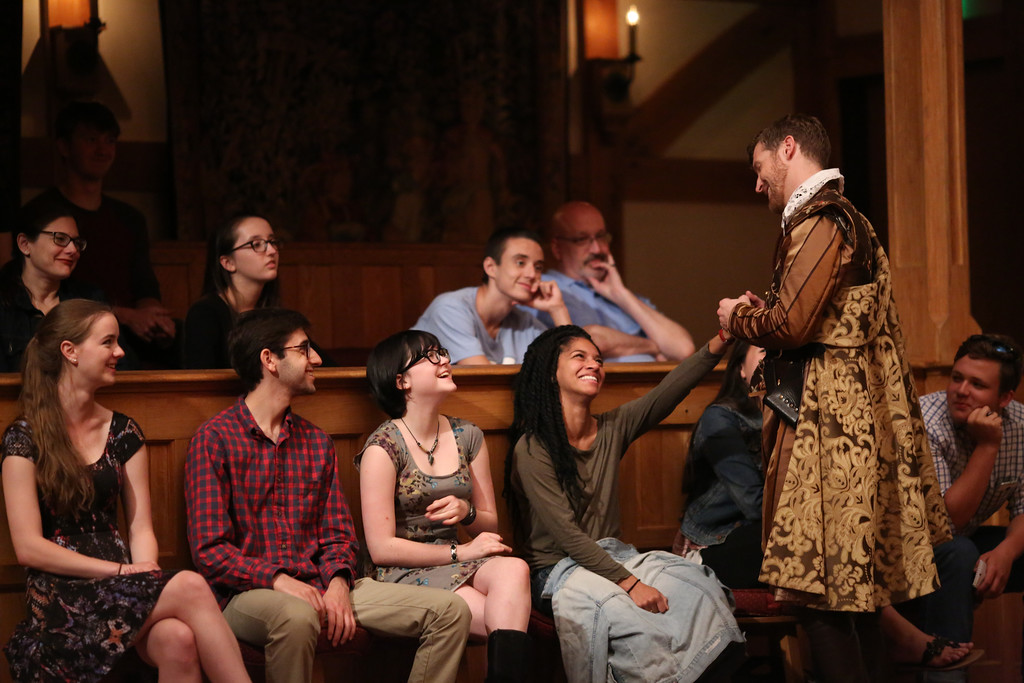 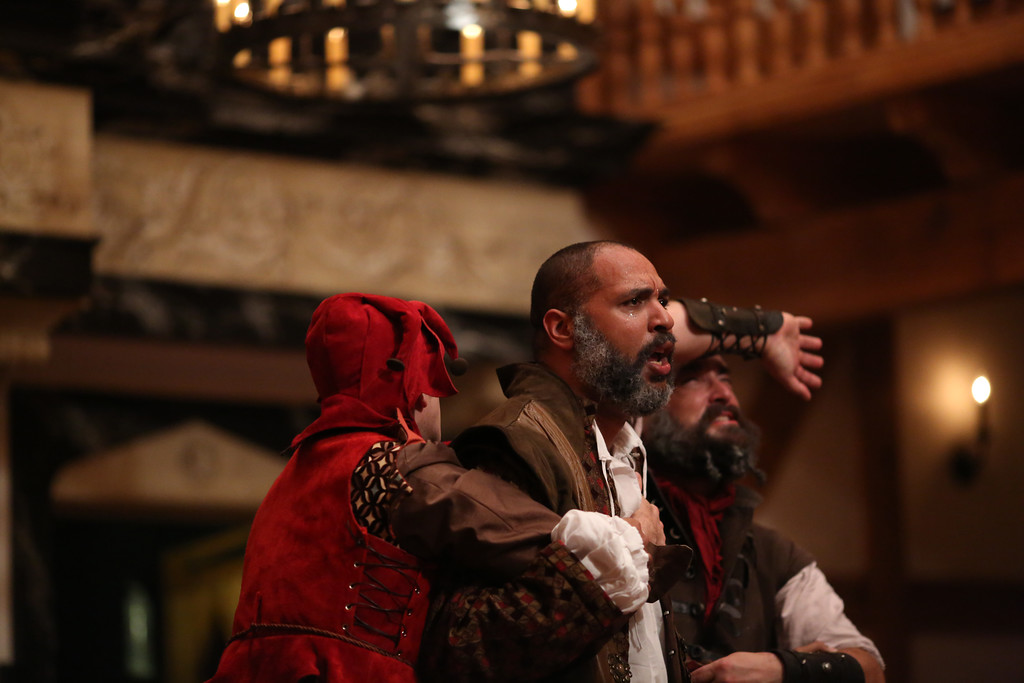 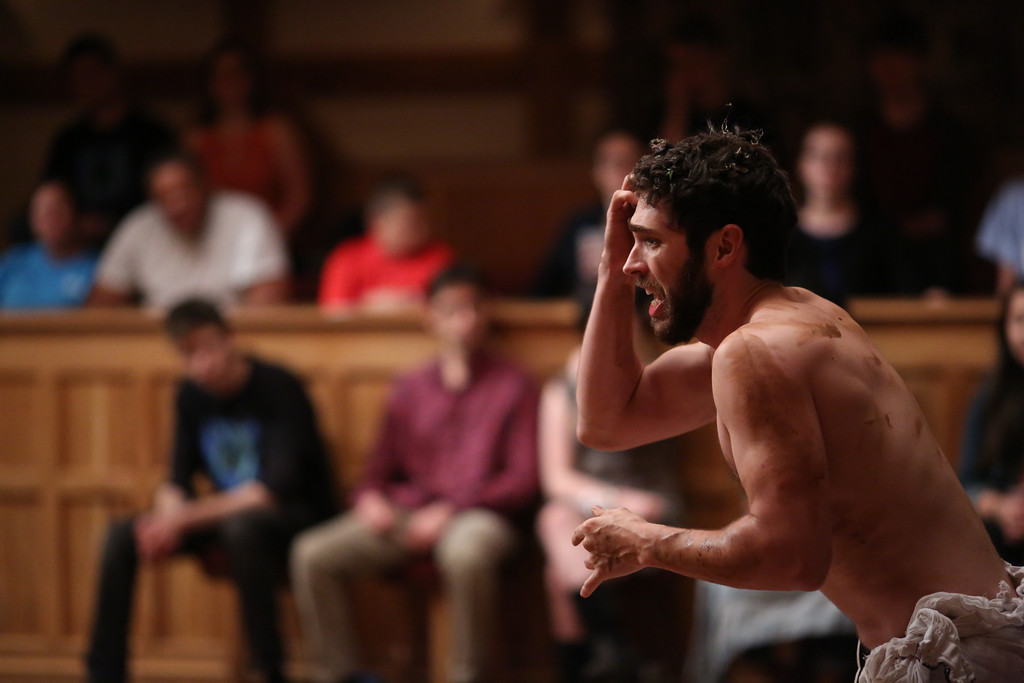 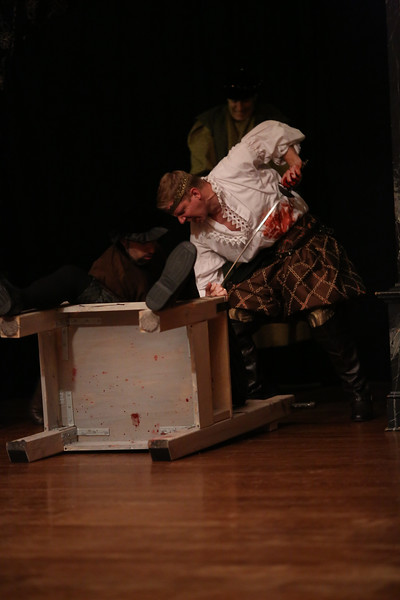 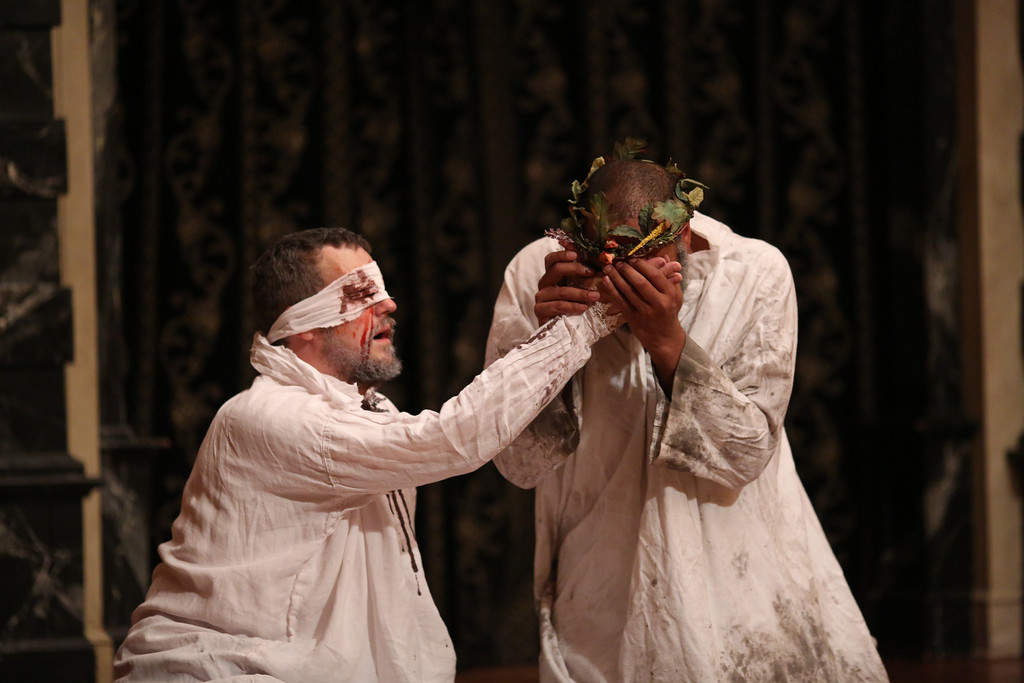 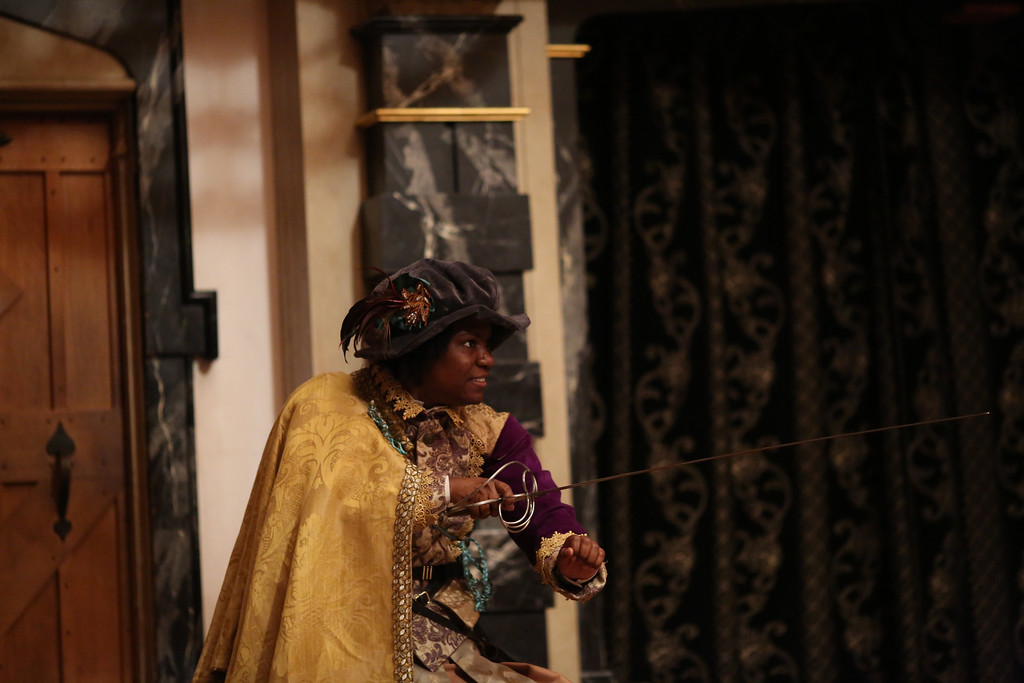 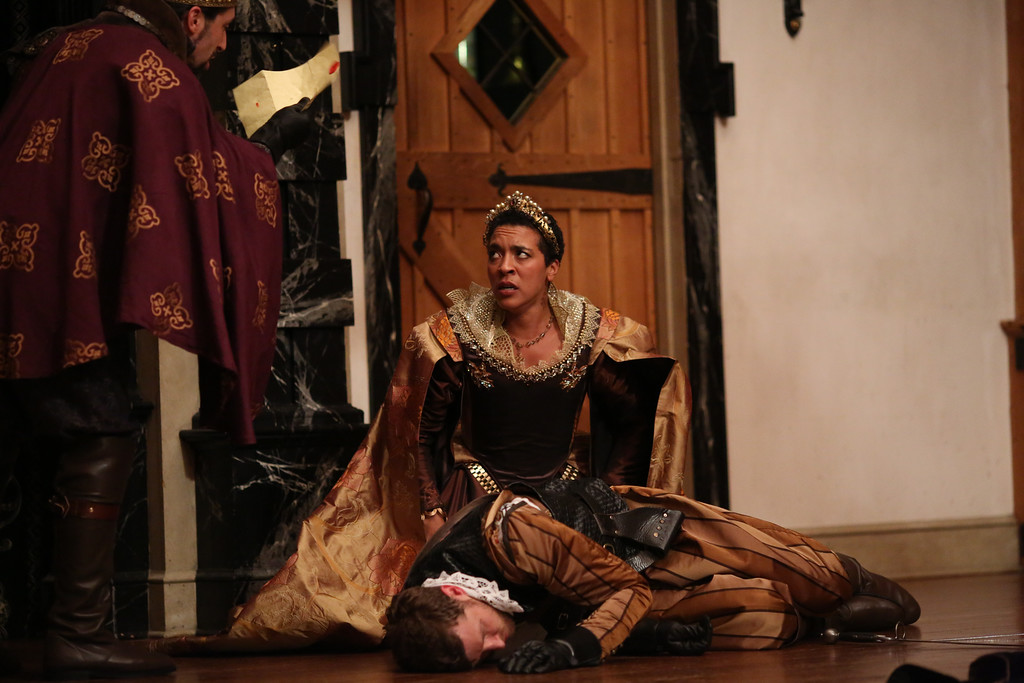 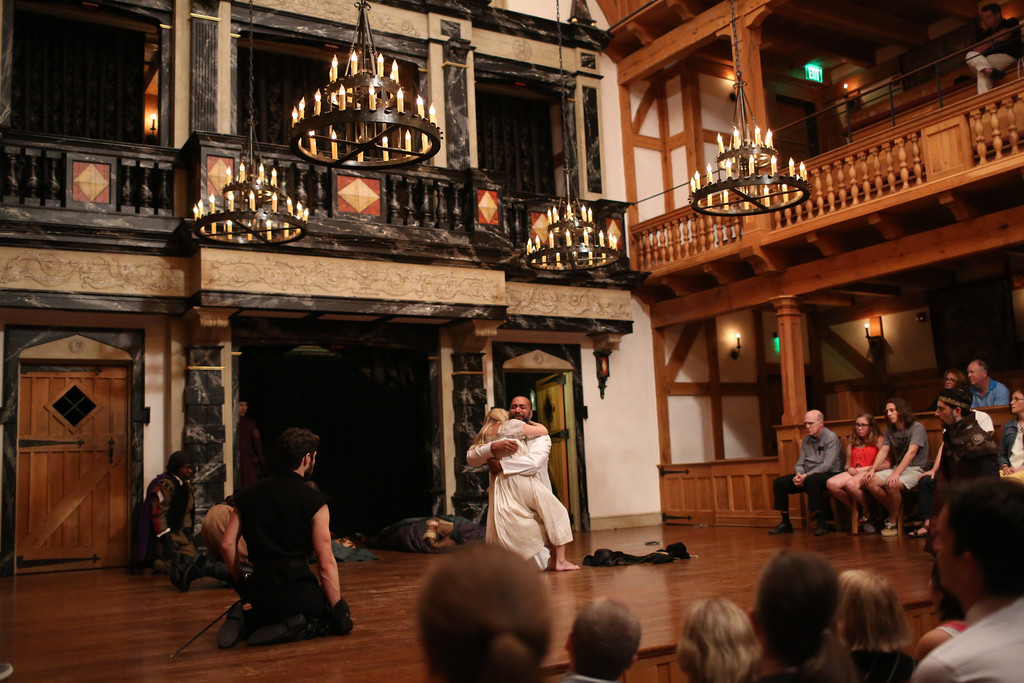 The cast of KING LEAR. Photo by LINDSEY WALTERS. 2016.

There’s a doodle in the margins of the c.1250 CE Northumberland Bestiary (a guide to the animals of Britain – including hydras and unicorns) of King Leir of Britain demanding declarations of love, his daughters Gonorilla and Regan flattering him, and his daughter Cordeilla refusing to do so. The doodler likely knew the story of ruinous division from Geoffrey of Monmouth’s Historia Regum Britanniae, c.1136 CE. Geoffrey dates Leir’s rule in the 8th century BCE, contemporary to the prophet Elijah preaching, and Romulus and Remus founding Rome. You and I are among 2,800 years of people engaging in the story of this political family.

Shakespeare’s play, as usual, doesn’t much care about an accurate chronicle – Geoffrey’s, Holinshed’s or otherwise. The anonymous play King Leir was more faithful; our Genius Boy probably picked up a copy when it was published in 1605. King James I (James VI of Scotland) was two years into his reign then, and his chief political goal was a new united kingdom of England, Scotland, and Ireland – a Unity that the resistant Parliament would finally debate when they convened that autumn, after plague season. ‘Remember, remember the fifth of November,’ though? That very session, terrorists (Catholic recusants) planned to blow up Parliament and King James with thirty–six barrels of gunpowder hidden under the chamber floor. The Gunpowder Plot failed only because a lord received and shared an anonymous letter warning him to stay away from Parliament. Such a small thing, that letter. It prevented the murder of the entire political structure of England. The nation became terrified, neighbor suspected (and turned in) neighbor, haunted by the nightmare of what could have happened and if it could happen again. Shakespeare wrote King Lear inside this moment. It premiered in 1606 (as did Macbeth and Antony & Cleopatra. Richard Burbage, at 39, originated the title roles of all three plays. Astonishing.)

In truth, this play defies a director’s note: it is about who we are when we aren’t being who we’re not. It is essential. It is about everything and nothing, and the journey between. Four hundred years of theatremakers, scholars, and artists have played, written, and painted the moments of King Lear, echoing – or perhaps looking for a way to avoid, just once – its Howl. Fluffy bunnies, it is not. And yet, I find a deep joy, engaging it. A relief. A lifting of burdens in a mad 2016 world that seems full of relentless division, devastating storms, terrors, family emergencies, poor naked wretches, sudden loss, and the constant advertisement of inchoate or mundane evils lurking to kill us, news at 11. Our world’s also full of wise fools, men and women of extraordinary service, and radiant moments of quiet peace with our dearly beloved. The terrible beauty of this great play has been painted for four hundred years. Welcome to our discovery of it.